I decided that I was going to try to make “simple and quick” reversible drawstring favor bags for the Ladybug’s recent birthday party. (Because buying some from the Dollar Store was just too much work, right?) So I got some adorable Tinkerbell flannel on sale and found about 2,700 tutorials online (none of which met my expectations for “simple and quick”, but we’ll save that for another post) for guidance.

Then I put it off until the 11th hour.

My sister and I got to work on them at 11 pm on Friday night. 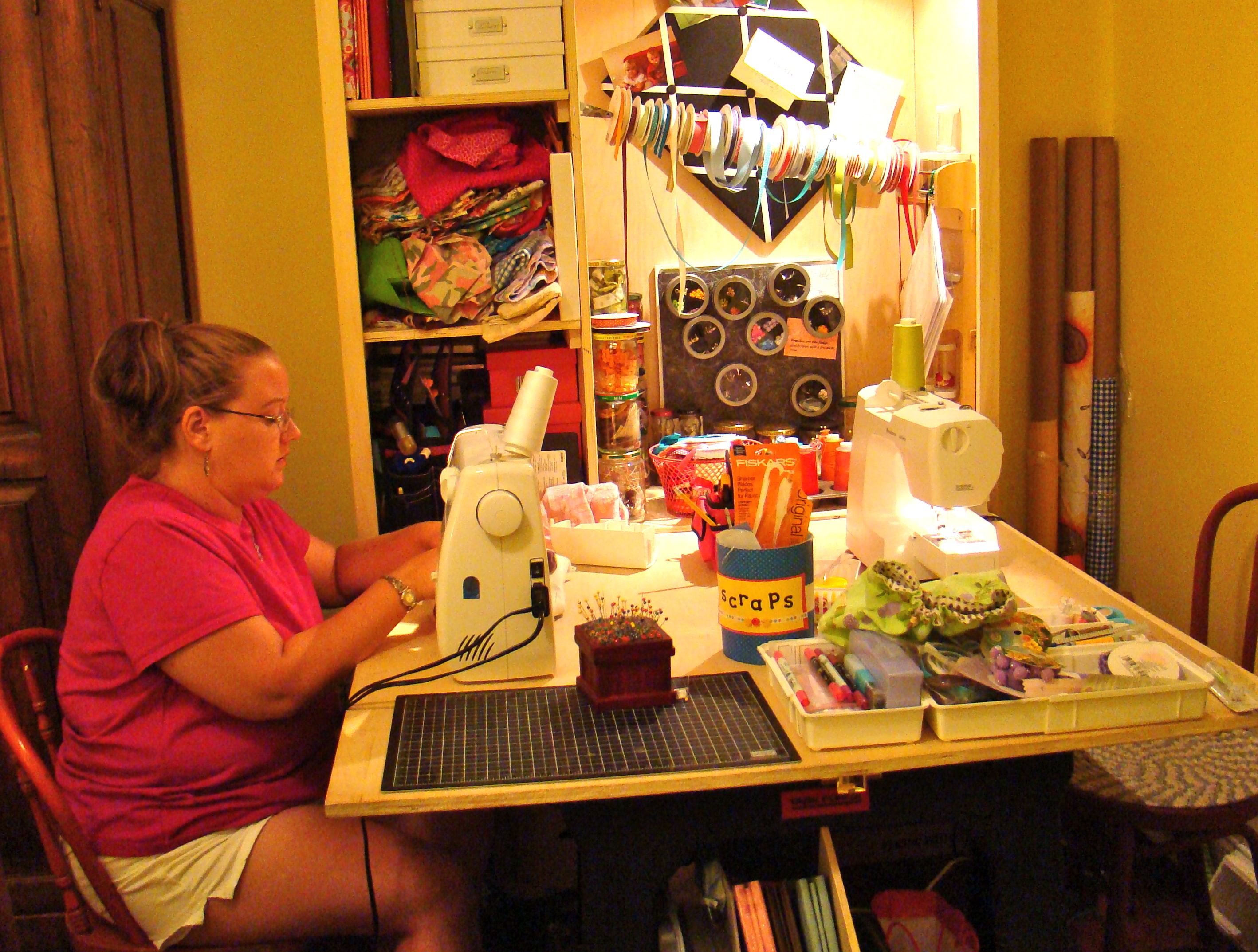 Here’s my workshop set up with both of our machines. (P.S. She told me that I was not to post any pictures of her on pain of death. So please pretend you don’t see her sitting there in my picture.)

We finished 7 Tinkerbell and 5 camo-lizard favor bags at 2:40 pm on Saturday. Since the party started at 3, I would say that qualifies for right on time! 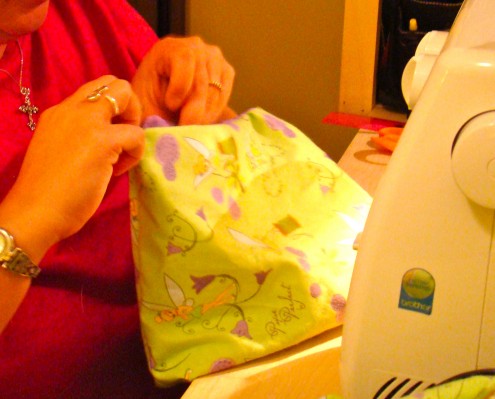 Theoretically, it’s the same as any reversible tote bag, until you get to the drawstring casing part. So we were both pretty familiar with the process.

I went back and forth about whether to just do Tinkerbell for all of them, since it was the Ladybug’s birthday. But then I thought, they’re not disposable, so many the boy’s don’t want to be stuck with a Tinkerbell bag that they feel guilty throwing away. Then I thought, maybe they shouldn’t feel guilty and this is just overboard for a birthday and I should just put stickers on brown paper lunch bags and be done with it. And then I thought that certainly wasn’t environmentally friendly and I don’t have any lunch bags anyway.

And then I had another cup of coffee because it was 10 pm and clearly I hadn’t had enough caffeine yet. 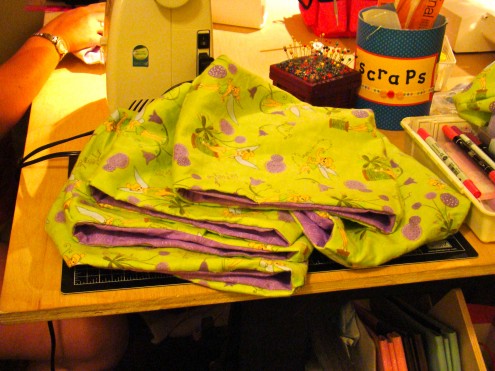 We sewed assembly line style–first all the bags, then all the drawstrings.

A fellow crafty-momma and Twitter friend, Aurie, suggested that I do the boy’s bags as pirate bags and use tan cloth with a black eye patch. (I also thought that red/white stripes with black would work!) This was brilliant, if there’s anyone out there thinking about a handmade Tinkerbell birthday! Oh so Tink and Peter Pan-ish.

Unfortunately I had neither red and white or tan or black fabric.

And I had waited until the 11th hour.

So I had to go with camo-lizards.

But I think that works, because aren’t the fairies all nature lovers? I know they love bugs. I’m sure they love lizards too…except maybe not since lizards eat bugs… 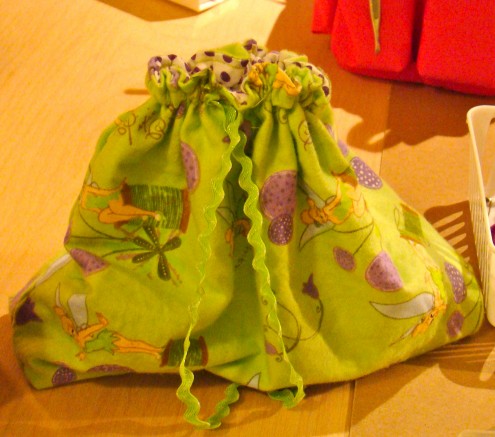 Our first specimen had the drawstring right at the top. We moved it down on the rest of the Tink bags.

We finished all the Tinkerbell bags on Friday night and save the boy bags until Saturday afternoon. That gave me a chance to stew on them (and do 3 loads of dishes, make 6 lbs of potato salad, and sweep the floor one. more. time.) and devise a simpler way.

We didn’t line the camo lizards. 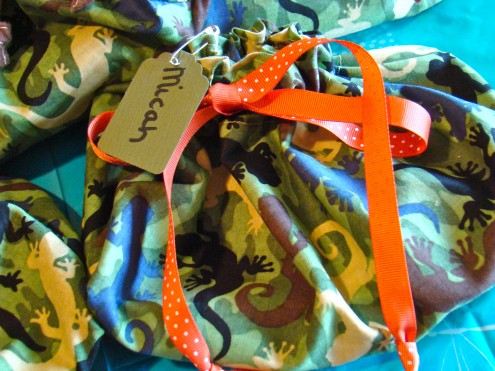 They turned out very cute, actually.

Because I took a short cut with the drawstring casings, the Tinkerbell bags weren’t actually reversible. So I decided to skip the lining all together if they weren’t going to be reversible anyway and we got the 5 boy bags done in about 35 minutes. 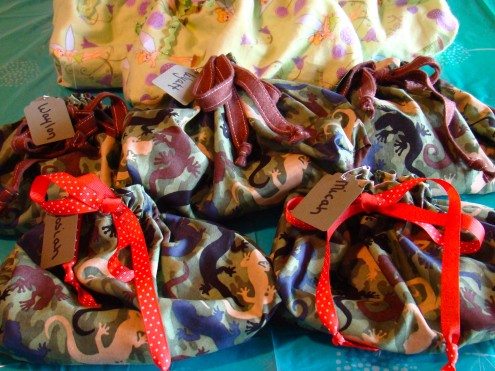 We both especially liked how the brown flannel ribbon worked with the lizard bags. A wide casing and smooth ribbon turned out much better than the narrower ones with ric-rack.

We labeled all the bags with a quick name tag (thank you paper punches!) to keep from getting them mixed up because we had several different ages and tried to stuff them appropriately. It worked out ok. 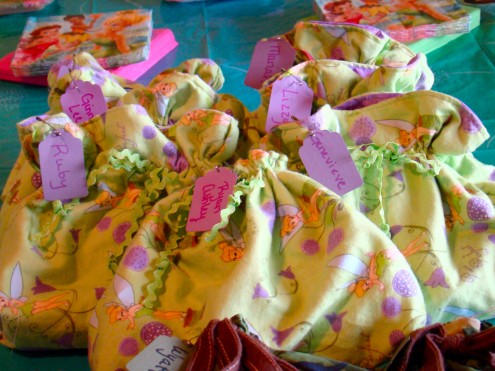 I would definitely do this as a party favor project again–although I would use different bag dimensions.

They were very fun and not really that much extra work. Maybe 4 hours, total? Waiting until the last minute made them seem more stressful than they really were, and I actually enjoyed it anyway (not sure about my sister’s take on that one!). I definitely feel that I could whip them up again easily–they totally feed my creative spirit and confidence!