I’m so proud of my kiddos. I really am. Sometimes I forget that they’re only 7, 4, and 3. (And even though the Ladybug is 7, when she does stuff around here she’s not cooperating with peers. She’s collaborating with a 3 and 4 year old.) 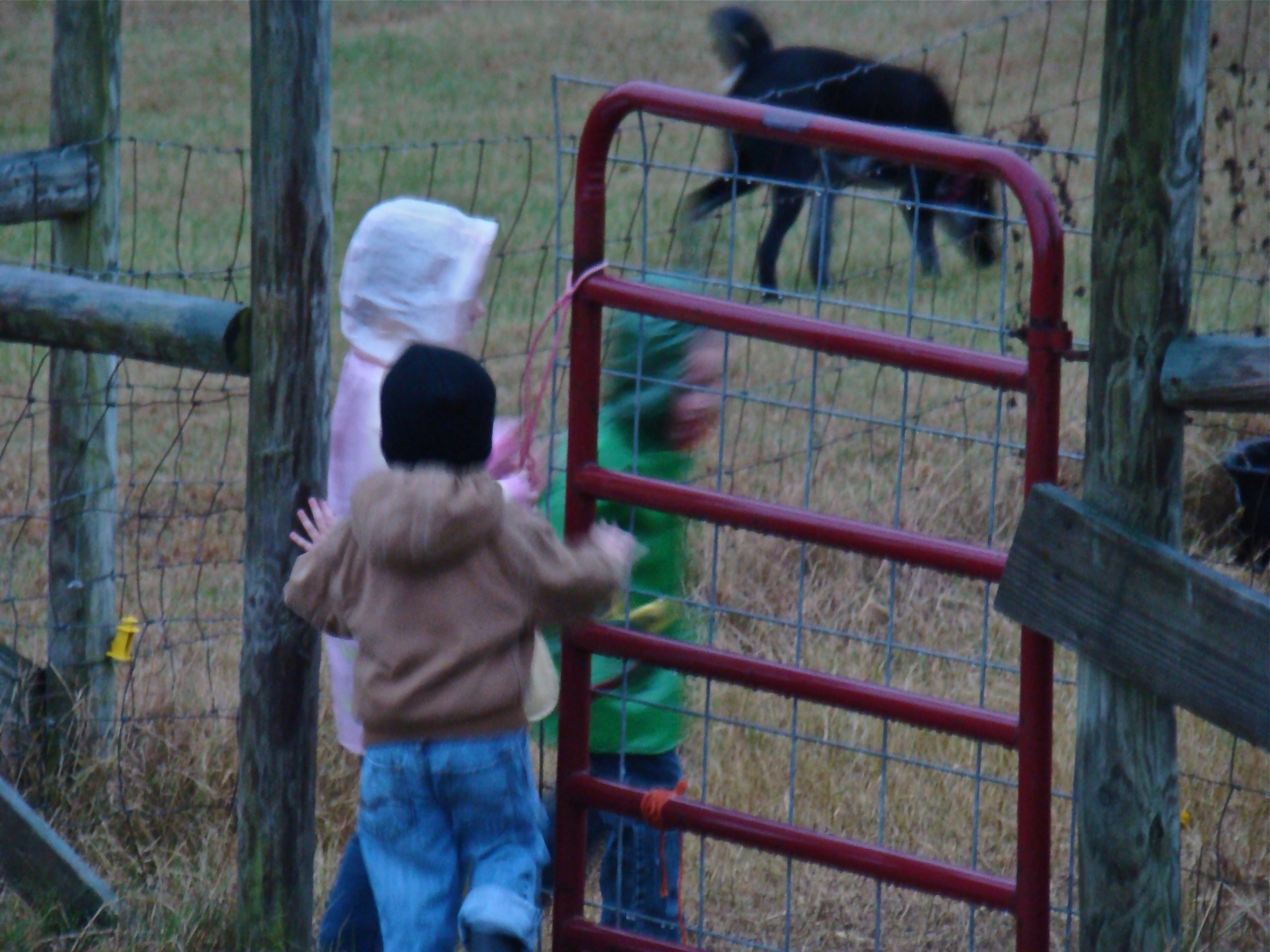 Wish the pictures were better, but I’m still glad I got something!

On Friday, before I left for the Ladies Retreat, I sent them out by themselves to move some water buckets around for some new sheep we got. It was foggy, cold, and rainy. They had to open and close gates and make sure that none of the sheep got out (and Penny didn’t get in!). 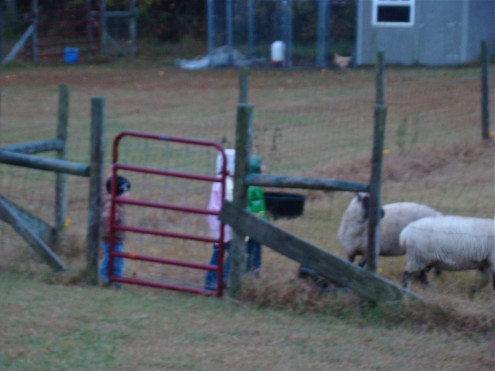 Speedracer was the gate guard. 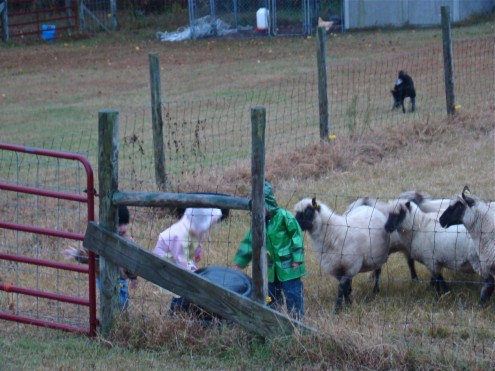 They had to get the empty bucket from this field…

Do your kids work independently a lot? I thought this was a pretty big deal because they had to work together and I sneaked out to take pictures but I didn’t give them directions or anything once they left the house. 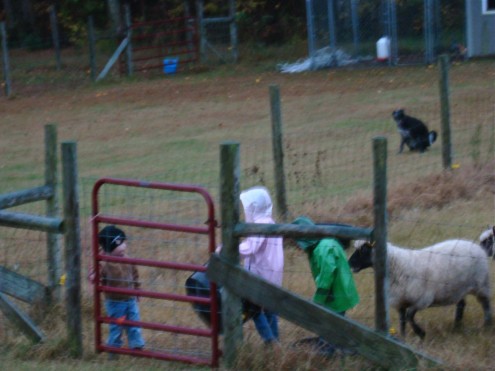 The sheep thought they should be getting fed and were getting a little pushy.

They don’t work this well to clean up the playroom. 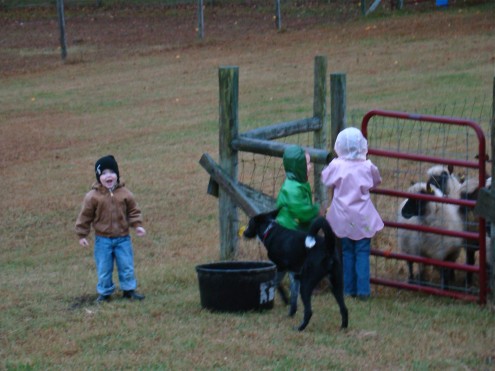 Maybe I’m overreacting. All they had to do was move an empty bucket from one side of the yard to the other side and fill it with water. But at that age I don’t remember doing much in the way of chores at all besides cleaning up my room. Especially not undirected or unsupervised. And involving 100-200 lb animals. 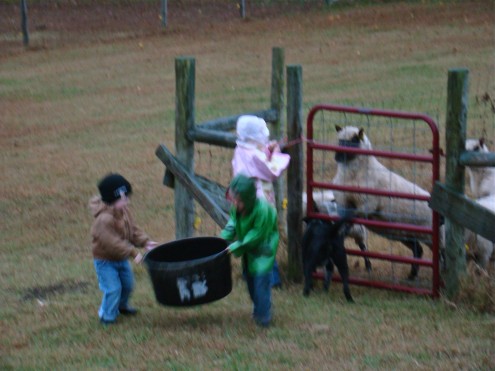 That sheep standing on the gate crying for food…we call her the Queen Bee.

And I’m proud of Speedracer really sharing the load lately. I posted earlier this summer about struggling to make him help. Well, he really has been. He’s not as mature to work unsupervised as the Ladybug and the Cowboy were at his age, but he’s been being more of a team player at chore time around here. And he’s still only 3. (Although Mr. Fix-It says that’s no excuse!) 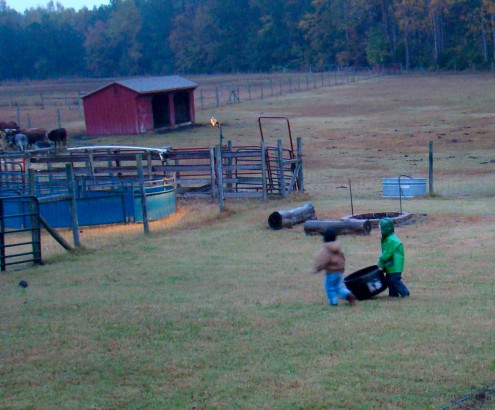 I love seeing my kiddos out there working together!

Yesterday would have been my Dad’s 53rd birthday. I can’t imagine how thrilled he would have been to see my crew out there doing their chores. Their work. I can close my eyes and see him puffing out his chest a little, see his smile and the way his eyes would glow when he told other people about it. “It was just neat to see them out there. It was just so cool to see them working on the farm.” 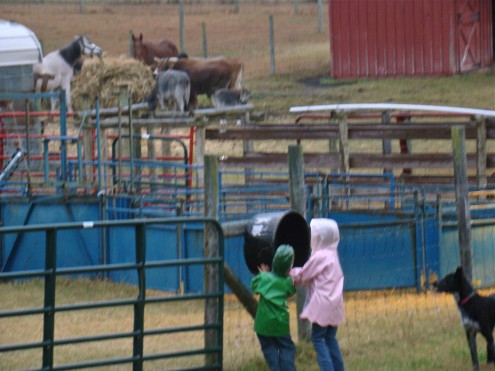 They tossed it over and filled it up with the hose.

I really miss him this year. There’s so much I want to share with him.

So much I hate that he’s missing. 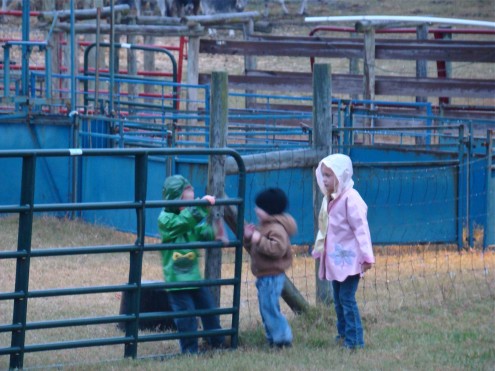 And here my camera died…but they finished their job just fine.

The best I can do is be sure that I treasure each moment for myself. Be thankful for each day. I know as well as anyone can that we’re not promised any tomorrows. That’s a lesson that has sunk down deep into my bones and permeates my every breath like the oxygen that fills our blood. In a moment it could all be gone. God’s plans are not our plans and His timing is not our timing.