Our Cowboy turned 5 on Sunday and can I just tell you how happy I am? I was so proud of him at his little party. What a blessing to have grateful children! I just can’t help but brag on our little guy!

It was just a tiny affair with family, cake, and ice cream, but he was so grateful for every gift. He was so excited but never once forgot to thank anyone. He was standing and dancing in his seat and hollering “Thank you! Thank you!” even without being prompted. (And even to my sister, even though she wasn’t even there. Did you hear him, Cheese?) 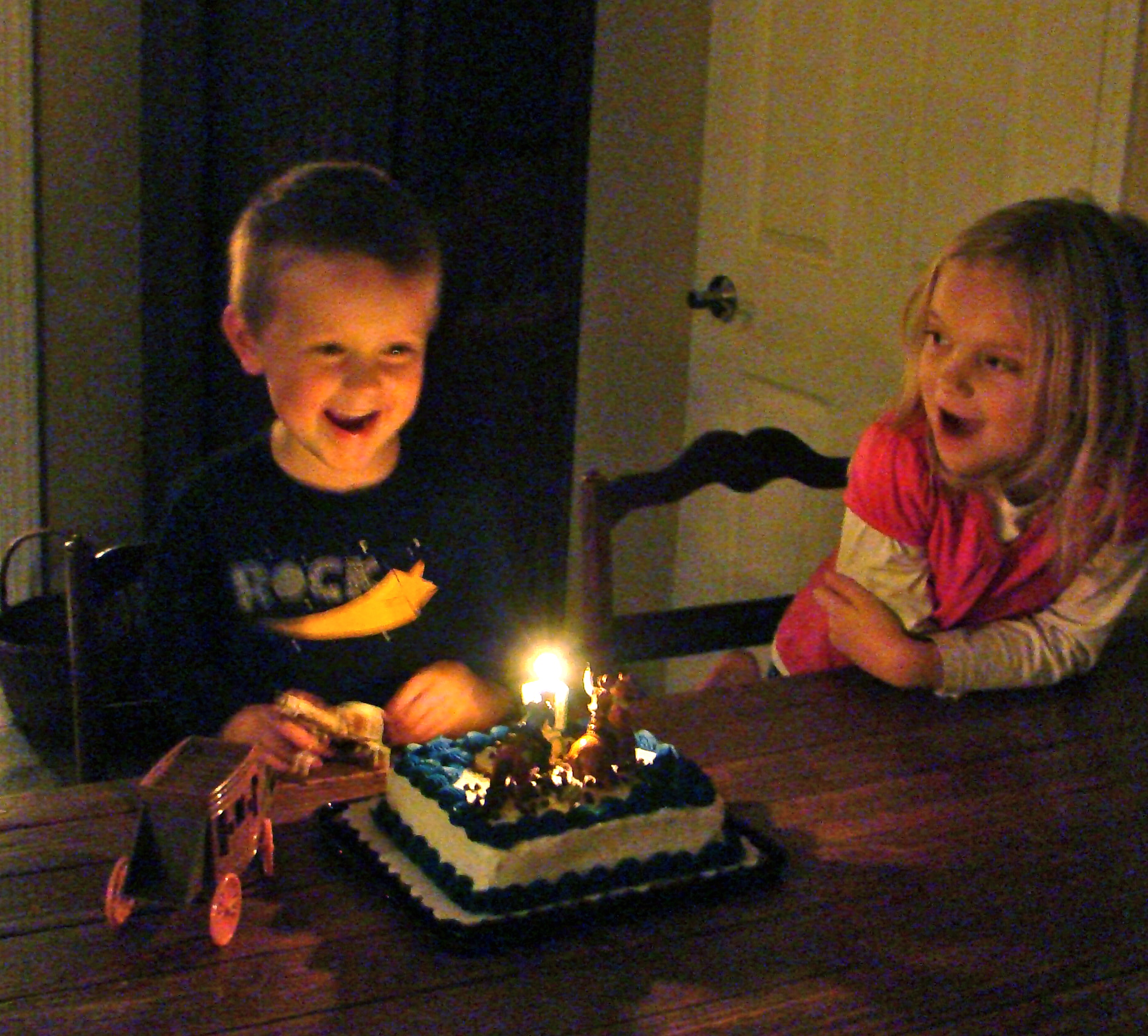 Don't ask about the cake. He had one. He was happy. Let's leave it at that.

It was just so sweet to hear him exclaiming “kuul! Kuul!” over and over again. {His version of “cool!” is a little different, and it’s hard to describe, but it’s adorable.} And then “That’s awesome!” Oh, it just melted my heart. 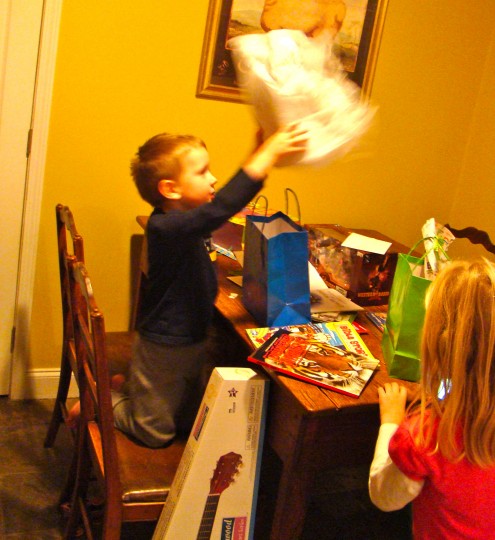 He was really good about sending all the paper right to the trash too.

He was actually listening to me as I told him who each gift was from too and didn’t fuss at all about taking a break from playing to call and thank my sister–and then run back to his toys. 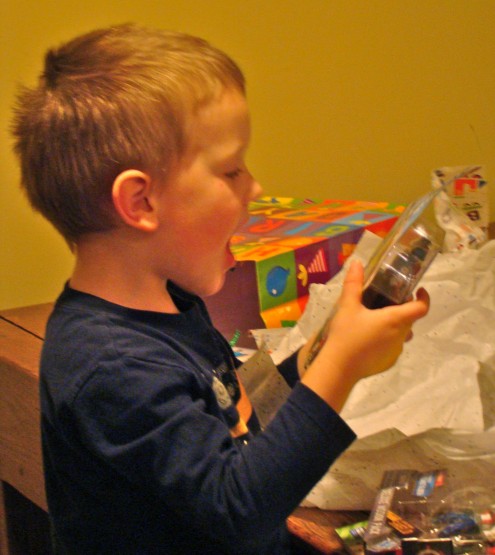 His little face was just so happy all evening!

He was excited about getting clothes–which I’ve heard a lot of kids fuss about. He was excited to get books. He was super excited to get a John Wayne edition play rifle that he doesn’t have to leave in the gun cabinet because “it doesn’t really shoot anything and it’s just for pretend, momma…” Really, I thought he was just going to dance himself right off that chair. 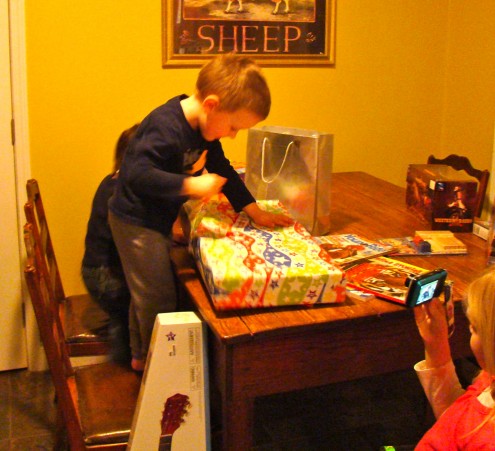 Notice the Ladybug? She was right in the thick of things taking video with her OWN camera. 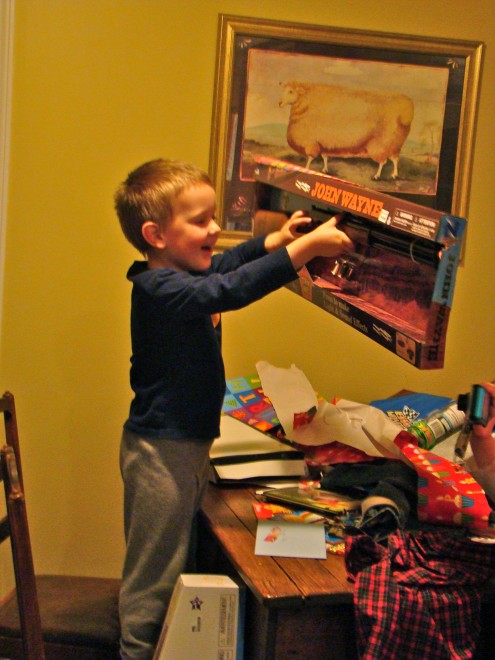 It makes noise, but there are NO projectiles. Thankfully. I don't need something else to keep track of!

We brought his new bike in last and he was very excited. I think it lost a little bit of fun compared to other stuff because it wasn’t built yet and was just a box. But I know he’ll enjoy putting it together with Mr. Fix-It later. 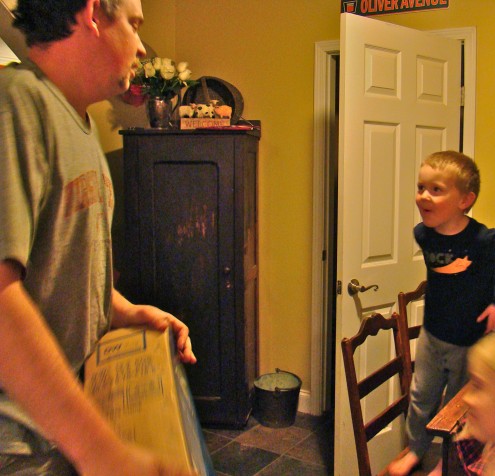 His new bike was the climax of the evening.

Now, sharing after opening has been a little tougher. For him and his brother.

Speedracer’s birthday is in January and he’s having a hard time because they both like a lot of the same things and he wants to play with everything and doesn’t understand why if his birthday is coming it can’t just be now. Every time the Cowboy puts something down, Speedracer bolts in, grabs it, and zips off into the other room to play with it before he gets caught.

It’s been a problem.

But I suppose there’s a good lesson in there somewhere too. {Note-to-self: If you see a brown-haired blur booking past you while trying to shove Captain America up his shirt, don’t laugh. That only fuels the fire.}