I’ve been a little under the weather lately. Probably because the weather’s been a little crazy lately. One day it barely gets up to 30 degrees all day and we’re having snow flurries at night, and two days later it’s 55 degrees.  I’ve been desperately fighting off a cold. (Or suffering from a cold that I won’t admit to–I’m not sure where you draw the line on that.)

And now it’s raining. Not the pouring, stay-inside-and-sip-tea kinda rain. Oh no. It’s the gray, gloomy, misty, everything-just-stays-damp kinda rain. The smell of wet dog is bad enough, but there’s nothing that makes you feel muckier than having wet sheep rubbing all over you at the feed trough morning and night. 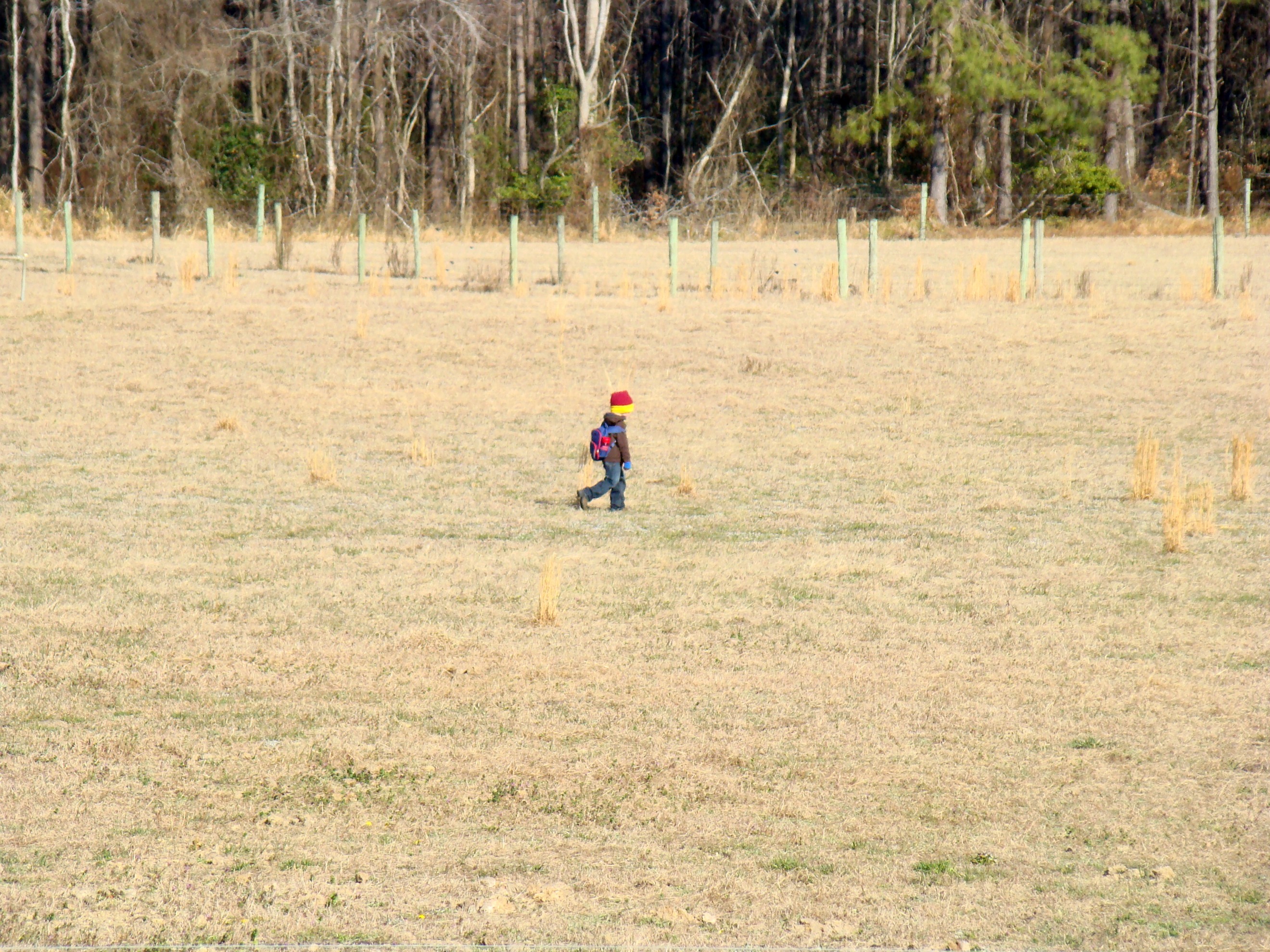 But the weekends have been decent. For January.

And my kids have been obsessed with playing Secret Agents since Christmas.

And now they are also Spies.

I’m not sure what the difference is, but apparently that bright pink sweatsuit is applicable to all sneaky professions. 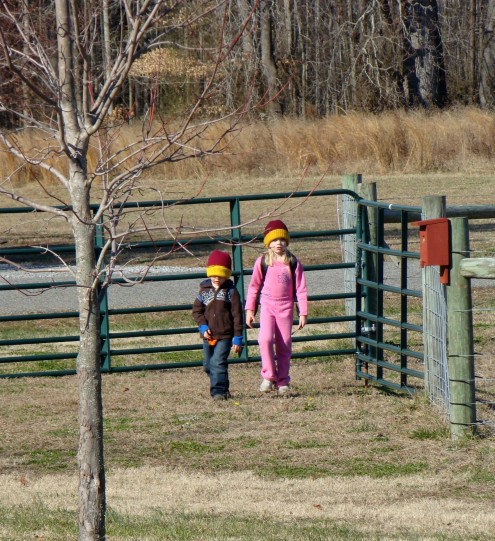 It occurs to me that our kids occasionally look like homeless vagabonds when they're out playing.

Either that or it’s just super comfy and it keeps ending up at the top of the laundry basket by Saturday morning because it keeps getting washed. (Just for the record, we use “hampers” for dirty laundry. “Laundry baskets” are only for clean, folded laundry that never quite makes it back into their dressers. Anyone that has visited our house can vouch for me on this one.) 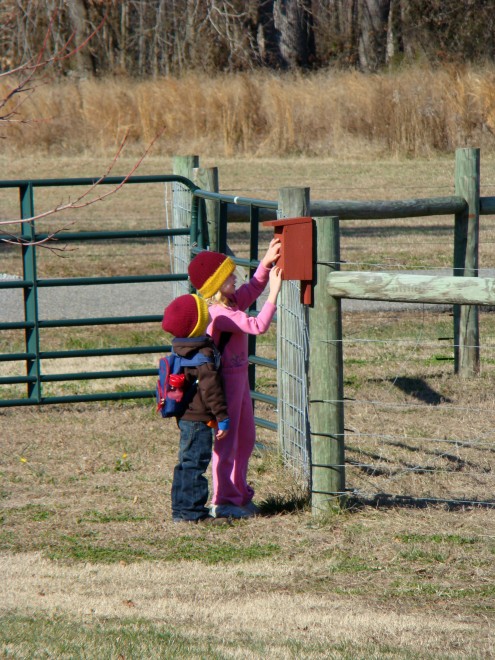 But there's no need to dress up for a day exporing empty fields and sheep huts and birdhouses.

This time I packed them some apples and bananas and pink lemonade to sustain them. Along with their “bee-lock-u-lers” and other various implements of Spying…Spy-ers…Spydom…how would you say that, anyway?… including 3 flashlights, a couple plastic cows, a Minnie Mouse cell phone, a handful of Legos, and one black knight on a horse that lost his lance (which I found later by stepping on it going up the stairs.) 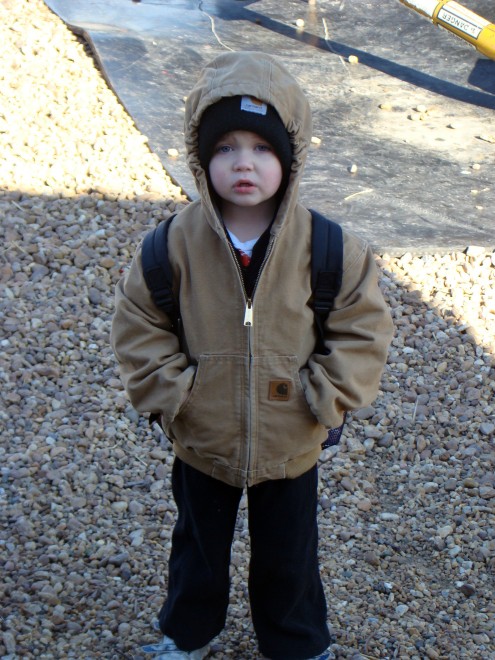 Speedracer got cold and came back for his coat. Eventually the Ladybug did too. The Cowboy never did because John Wayne doesn't wear a coat, only a "rain slicker."

I’m sure with all their preparations they could have conquered the world. But they just decided to spy on their Dad while he was working in the garage instead. 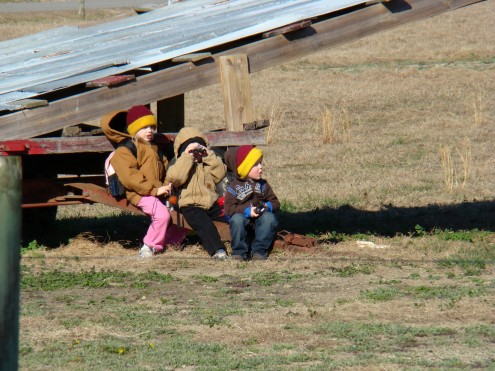 They've had free run of some of our bigger fields because there's no grass right now, so there's no livestock out there, but they're fenced in so they're very safe.

Our place is looking pretty barren right now. (Except for my flower gardens, where green weeds seem to absolutely thrive despite all of nature’s efforts to kill everything off for the winter.) The animals are mostly in the smaller fields close to the house. Feeding hay and grain is hard on the ground, especially when it’s bare in the winter. The animals tend to congregate by the food and trample the areas nearby down to the dirt over and over again. So we move them off the “good” fields to save them and use our barnyard fields as “sacrifice” areas in bad weather and winter. 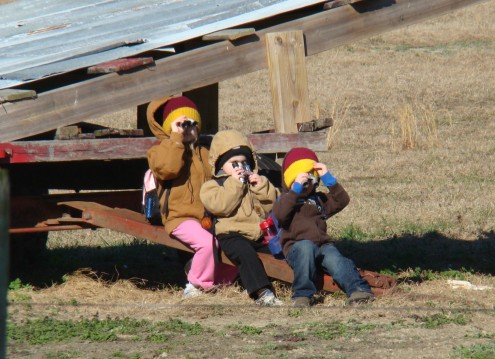 They each got a little set of bee-lock-u-lers for Christmas that they LOVE.

Every couple of weeks we’ll turn the animals out in the big fields again briefly, if the ground is firm, to eat off the weeds that are cropping up. I’m not sure that we’ll ever get to year-round grazing in our area without planting winter annuals (which requires more work and more equipment–meaning more time and more money ), so right now we have our own grass spring, summer, and fall, and feed hay in the winter. We do have green ditches around here in the winter, so I don’t think it’s impossible to grow grass year-round, but it’s tricky. Our land doesn’t have the best soils after being row cropped for years and years and this area has distinct seasons and hard summers, so improvements for grass take time.

“Be patient therefore, brethren, unto the coming of the Lord. Behold, the husbandman waiteth for the precious fruit of the earth, and hath long patience for it, until he receive the early and latter rain.” (James 5:7)

“Life on a farm is a school of patience;
you can’t hurry the crops or make an ox in two days.”
–Henri Alain

How’s winter treating you so far?