Ok, so I’ve been promising a post about our cool chalkboard project for a couple days now. First I had to show you that we were actually making progress on the Playroom, so that there’s actually room for a chalkboard…then I had to interrupt everything to let you know that lambing season is underway here at The Lowe Farm and every time we turn around fuzzy new faces are showing up!\

But on to the chalkboard! 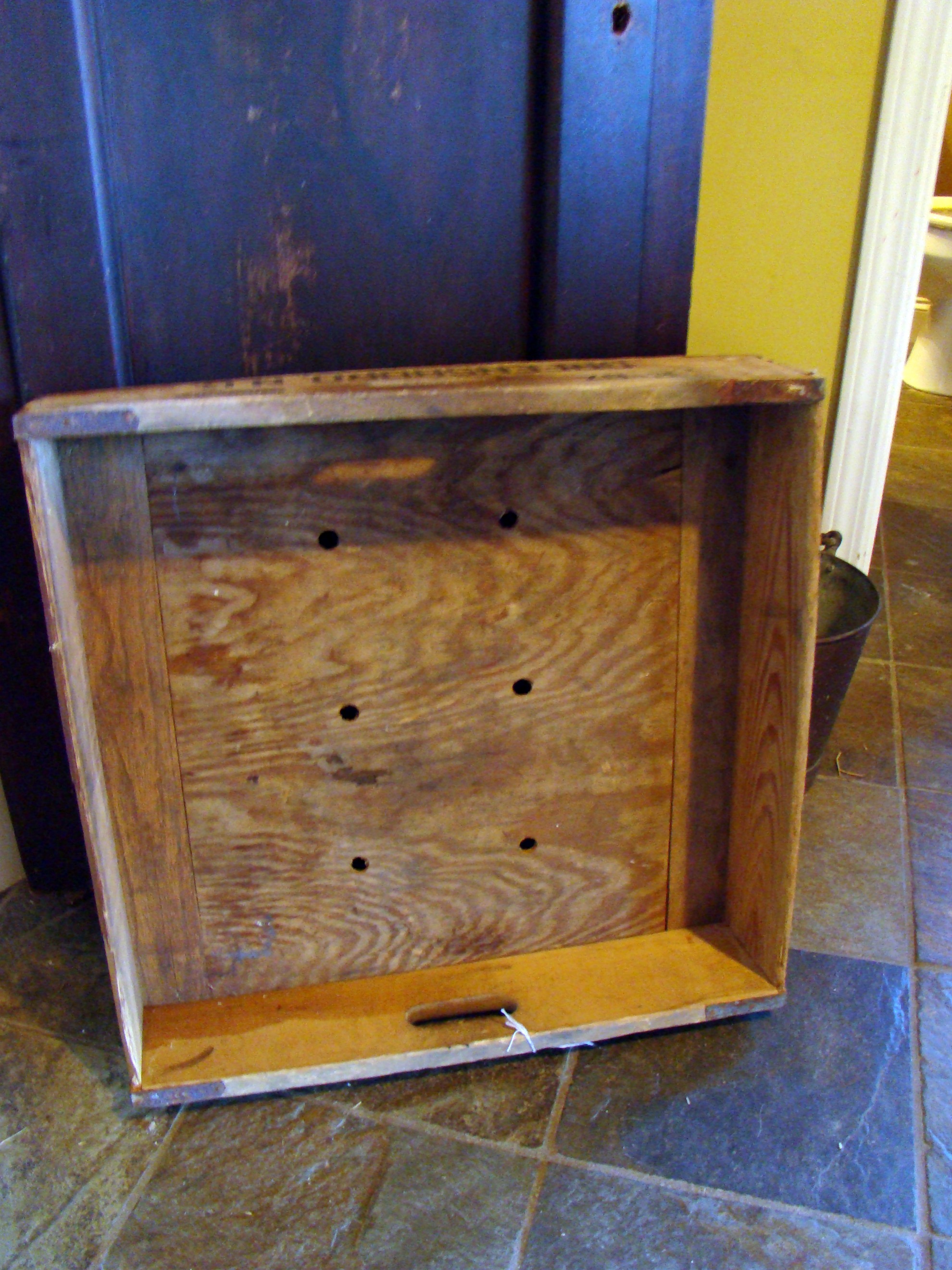 This is the super cool antique box we found to be the basis of our new chalkboard.

When we all agreed to give our play kitchen to the church preschool program, part of the deal was that the Ladybug would like to have a reading circle with a chalkboard on the wall so that she could continue teaching her brothers to read. We were all for that–conceptually anyway. I sort of expect that the school and Mr. Fix-It and I are going to teach them to read, but if she wants to participate I reckon it can’t hurt. 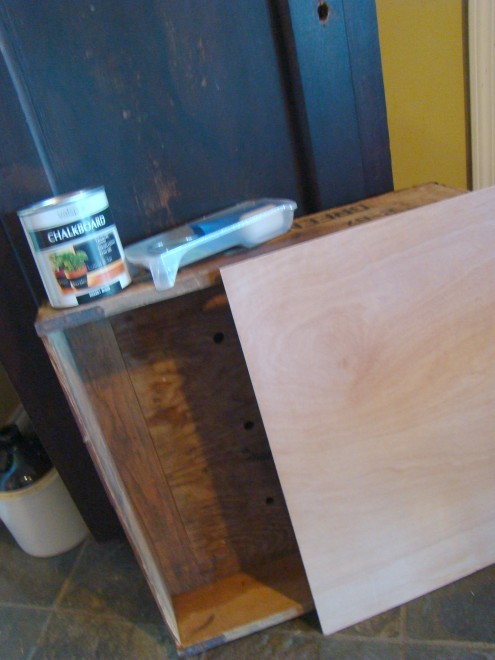 These are our supplies.

So while we were out and about last weekend, I was hunting for something that we could paint with chalkboard paint and hang on the wall. Pinterest is just full of idea and apparently you can paint just about anything with this new-fangled stuff. I had some different ideas, but our space is a bit limited too, so I had to be careful. We found this awesome old box. It’s 22 x 23, so just about square.

Then we went to Lowes and got some chalkboard paint (sorry the pictures aren’t better, we got Valspar), a mini roller, and a small piece of smooth particle board. The box was $23, the roller was $1.85, the particle board was $3.50 and the chalkboard paint was $15(!!).  It was a small can, but we only used like 1/4 of it for this project. 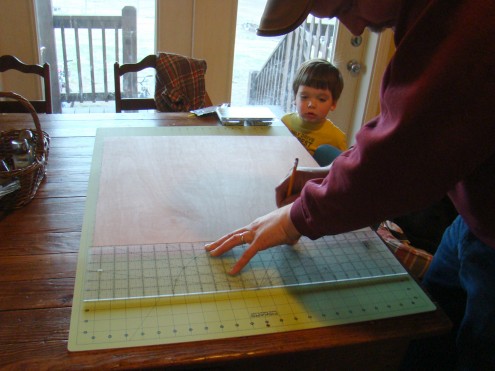 We bought a small, pre-cut peice of particleboard, but it still needed to be trimmed like 2-3 inches. He did it by hand--but see how helpful my sewing supplies are?!

The inside board idea was parting to be able to paint smooth, partly to overcome those strange holes in our box, and partly so that we would be able to use the box again in the future for something other than a chalkboard. We wanted something smooth for our writing surface. We cut down our plywood and it fits very snug in the box. We thought we might need to glue it, but it’s not necessary at all.

Then we painted both sides and the edges with the chalkboard paint and the roller. That stuff is super thick! We did two coats on every surface of the board. It says “quick drying.”

We used a hair dryer and it still took several minutes.

But the stuff is really thick, so maybe that’s why. 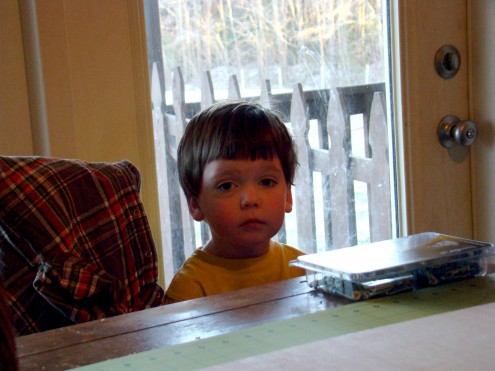 Did you see Speedracer's black eyes? He came out second best in a fight with a wooden desk at school. Go figure. He didn't cry though--he told me that. 🙂

Anyway, we painted the edges and both sides of the plywood with two coats of the chalkboard paint, dried it, and then fit it into our box. 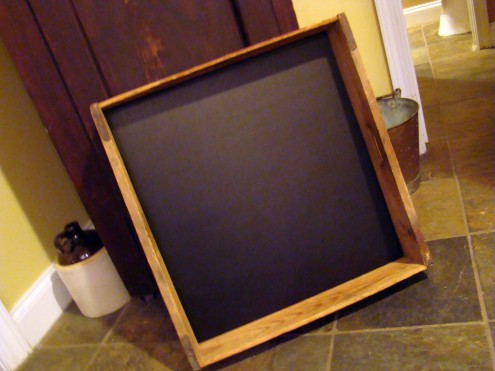 It dried beautifully. Smooth and shiny and ready for chalk!

Another little detail? We made a point to plan to hang it with the handle sides on the sides so that the non-handle sides can be a chalk tray. How cool is that?!

When we were at Lowes, they did a demonstration project where they painted a piece of drywall and it turned out good too. He said that they’ve been erasing it and writing new messages on it for several months and it looked practically new. He said every couple of days they will run a damp rag over it and it’s as good as new again. 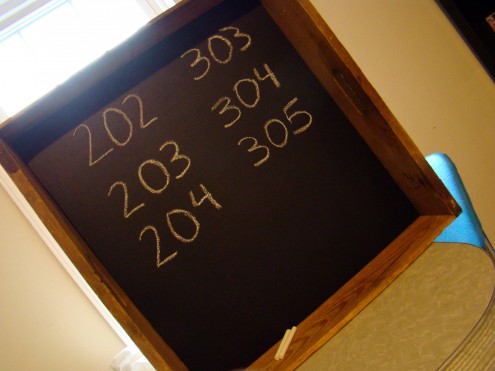 I think the size is going to work perfectly for our small area!

Conclusion? It was really easy and it wasn’t that expensive. You could probable paint any number of surfaces which would cost less than our box did. And that $15 can seemed steep for only this project–but we’ve got enough left to do a ton more projects with. I’m already eyeballing all sorts of stuff around the house…

We haven’t hung it up yet because we’ve got some other details to finish with the walls first (like maybe painting them, too?) But the kids seem pleased so far.

Although the Ladybug is still focused on those fish…