Our wonderful summer babysitter is on vacation this week, so we enrolled the kiddos in summer day camp at the local YMCA for the week. We didn’t have a lot of options, and they run their program week by week so we could sign them up just for this week and the week in July that we’ll need coverage while our sitter is at camp herself. And hey, camp is fun, right? 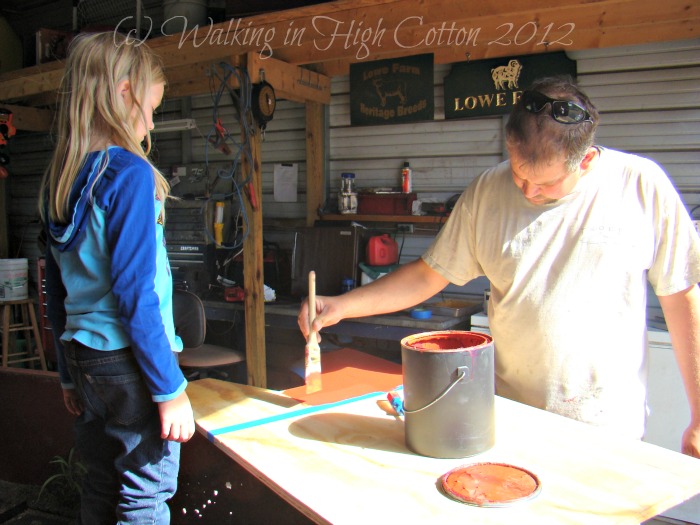 These have nothing to do with my post, I just thought they were great pictures of the Ladybug and her Daddy working on a project last Sunday.

The first day I picked them up–not knowing what to expect–Speedracer saw me, picked up his stuff while I was signing him out, and walked straight past me to stand at the door and wait. Fingers in mouth, silent. I reminded me of his first week of school last Fall. The Counselor told me that he’d had a rough day, but it’s just an adjustment for him, they understand it’s his first time at camp.

Oh yeah, and he peed his pants, but it was only in his swimsuit, so he’s fine.

Oh yeah, and he brought the entire building to a screeching halt after swim time when he lost his sock and refused to leave the dressing room, or put his shoes back on, without it.

They never found it, but he eventually caved in when another mother in the dressing room gave him a sock from their bag. {Umm…I swear there were extra socks with the change of clothes in both his and the Cowboy’s backpacks, but nevermind.} 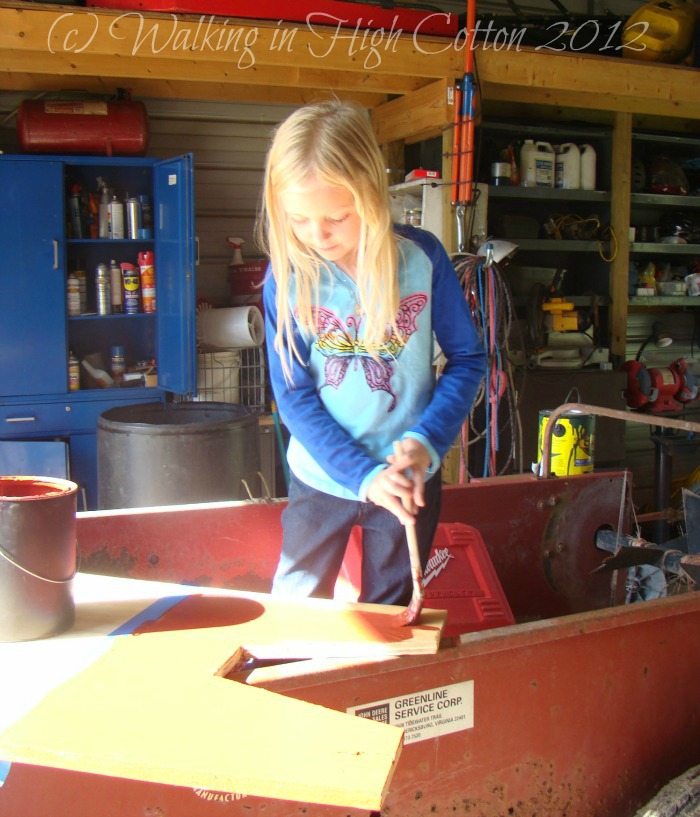 Ok, so it was the first day. No harm, no foul. (The mother behind me had to sign papers over the incident reports filed for her kids so I thought I was in pretty good shape.}

Then the Cowboy walks up to me and says, “Hi Momma. I lost my underwear.”

Wow–Ok. Glad I packed that change of clothes over someone’s vehement protests that he’s a “big boy.” 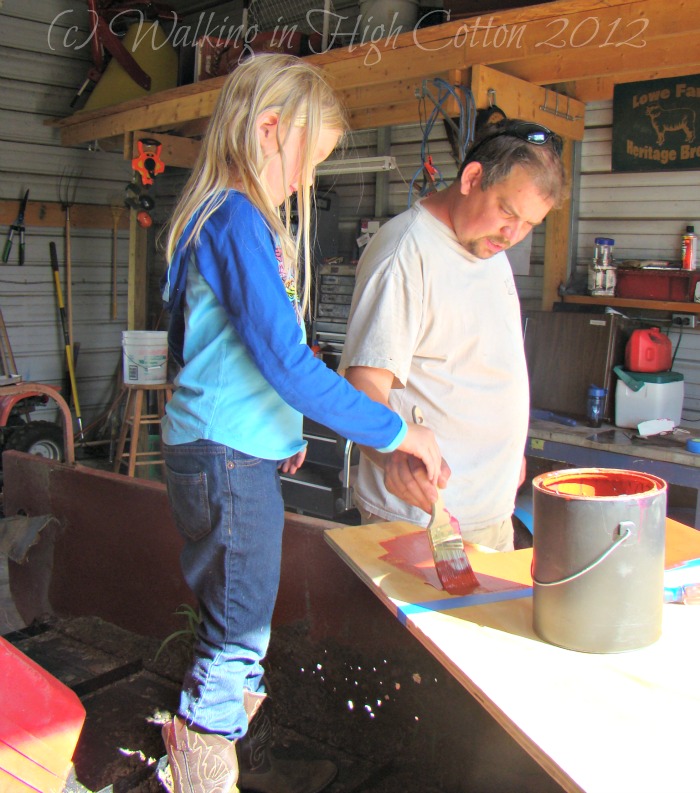 Mr. Fix-It’s pretty handy to have around!

As of this morning, we have lost a sock, a pair of underwear, a swim shirt, a beach towel, and a reusable water bottle.

We’ve had a bloody nose (the Cowboy), a snack thief (one of the Ladybug’s new little friends), and a pool time out for too much splashing (Speedracer). 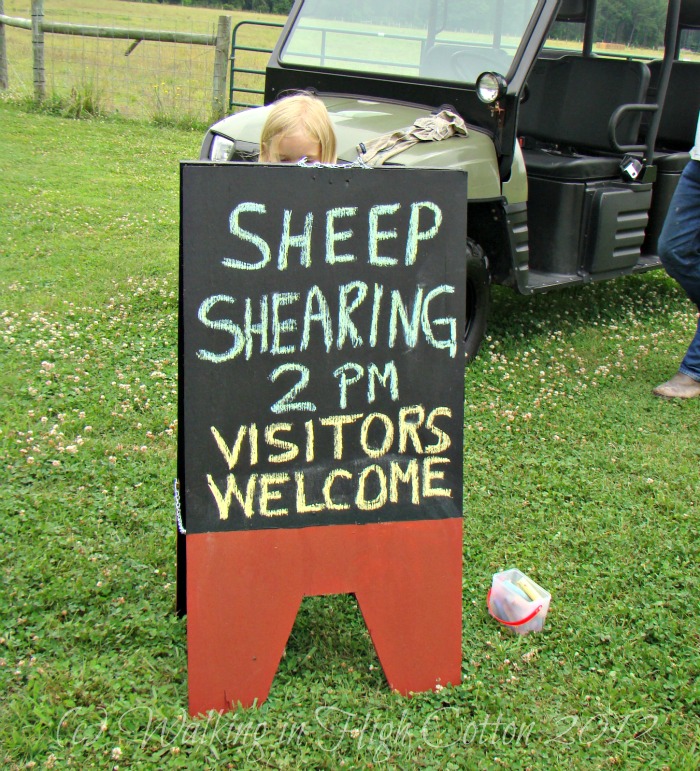 I did the preliminary letters, she thickened and retraced everything.

It turns out the YMCA program doesn’t do naps for the 4 and 5-year-old class. The Ladybug and the Cowboy are tired at the end of the day, but poor Speedracer is just a limp noodle by the time I pick them up. He put himself to bed the other night at 7:30.

I spoke with one of the Counselors yesterday and she said they have “down time” after swim time, and he’s welcome to take a nap if he wants too. Um, yeah, my 4-year-old boy is going to volunteer to take a nap while everyone else is playing–sure.

I mentioned it to him and he told me that “YMCA kids don’t do naps!”

But I have to admit–even as bleary-eyed exhausted as they are at the end of every day, they want to go back the next morning. 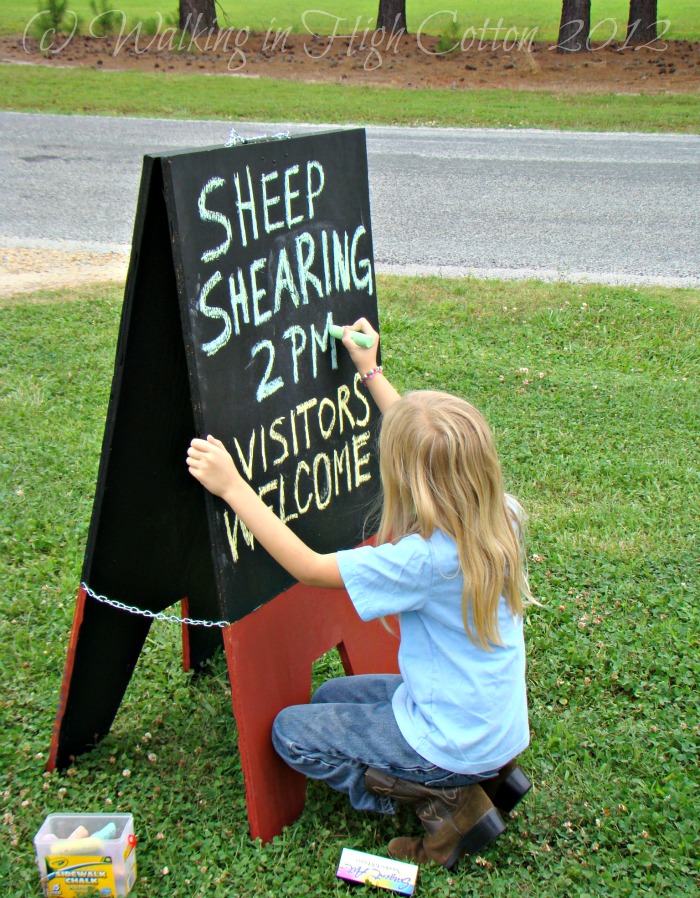 Since we were writing big, sidewalk chalk was definitely easier than skinny chalk. It worked great.

And I am exhausted by the vigilance necessary to understand their day in a completely new (to all of us!) environment and explain, direct, suggest, correct, and guide their perceptions of all these new things going on. The music they’re hearing, the clothes they’re seeing, the new ways of praying before meals…all these things that we, as intentional parents, need to help them filter.

Oh how quickly we all got out of our school day routine! I guess it’s a growing experience for all of us…