I’ve been reading some great articles about everyone starting to plan out their homeschool year, and while it hurts my heart that we still won’t be homeschooling full-time, I have been so happy with how some of our summer learning plans have gone that it also makes me feel energized for planning our own year.

Over the last two months we’ve done our first two, homemade, mini unit studies, one with Farmer Boy by Laura Ingalls Wilder, and one we just finished with The Stout-Hearted Seven by  Neta Lohnes Frazier. 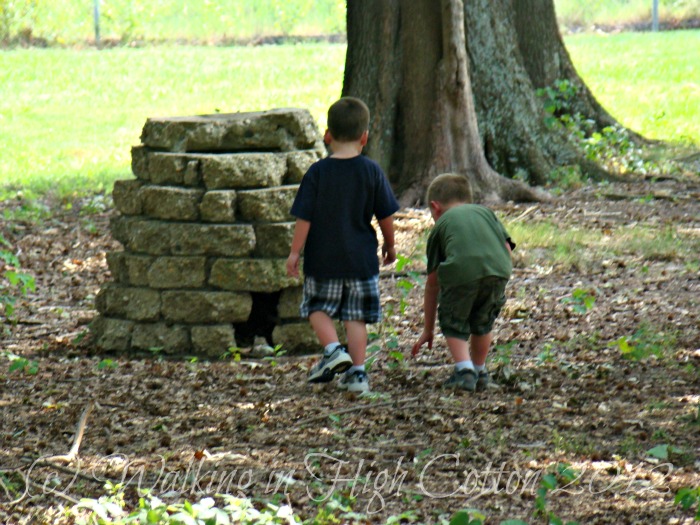 You know you’re a boy mom when…

I hesitate to use the term Unit Study because that is an educational method that goes deeper than our first efforts here. We’ve just scratched the surface of the possibilities.

But the idea is that you pick a topic and study it from multiple angles utilizing all (or many) different educational disciplines and learning styles, from reading to writing to math and science; verbal and sensory. And it works well across age groups–everyone studies the same thing, but at their own level.

Which makes it perfect for my vision of educational family time–engaging everyone from myself and Mr. Fix-It as adults down to Speedracer at 4 years old. 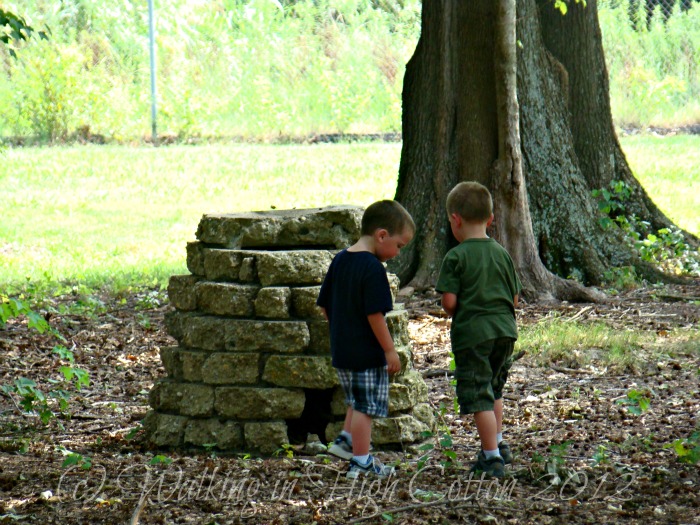 …You say “Boys! Get away from there! There might be snakes!”..

And because the concept of Unit Studies it partly interest-driven, it can be so fun!

The basis of our studies centers around a family read aloud–which I pick based on something of interested or value to our family at the moment.

We recently finished The Stout-Hearted Seven, which is the true story of 7 children who were orphaned on the Oregon Trail and eventually adopted by the Whitmans, a missionary family to the Indians in what is now Washington State. The children were at the mission during the unfortunate Indian conflict in 1847, which was historically called the Whitman Massacre, and only 4 of the girls survived to adulthood. Not really a happy ending, but I highly recommend it as a living history book! 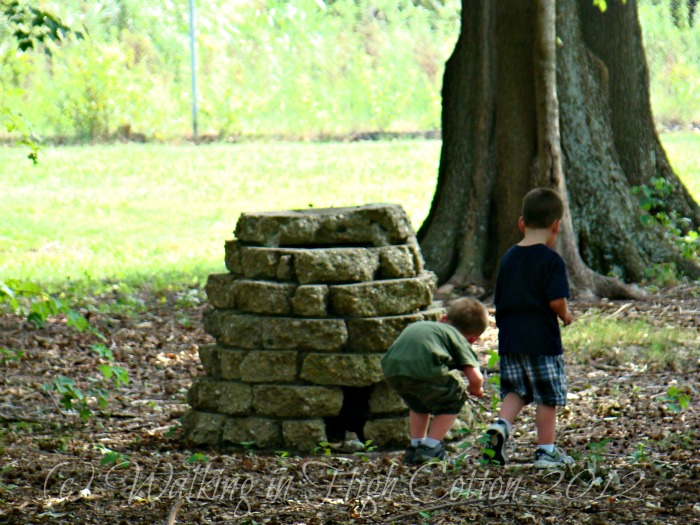 Around our read-aloud book, I added a couple of pioneer and Oregon Trail reference materials. I got a copy of Daily Life in a Covered Wagon–which is probably 80% illustrations and worth every penny of the $7 I spent! Every time someone had a question about something we read, like “what’s a wagon bow?” or “did she really pack her dishes in the food?” we just pulled out Daily Life and searched out a picture. (I would seriously consider this book a must-have for any pioneer study and I’m sure we’ll use it again and again.)

We also used the internet and found that the National Park Service has a wonderful, FREE, study guide to this book. I printed the study guide questions and some of the fun word searches for the kiddos. Google can really be a great tool too! We were able to find pictures of the Sager girls all grown up, and pictures of Dr. and Mrs. Whitman–that was awesome for them!

{NOTE: For older, or more mature students, there’s tons of diary entries and personal letters from the persons at Whitman Mission in the 1840s available free online. I read a bunch of them, actually, and found them fascinating! Just be aware that they are much more detailed and graphic than the book is. I decided not to share them with my kiddos this time because I thought the book was about as negative as they could handle.} 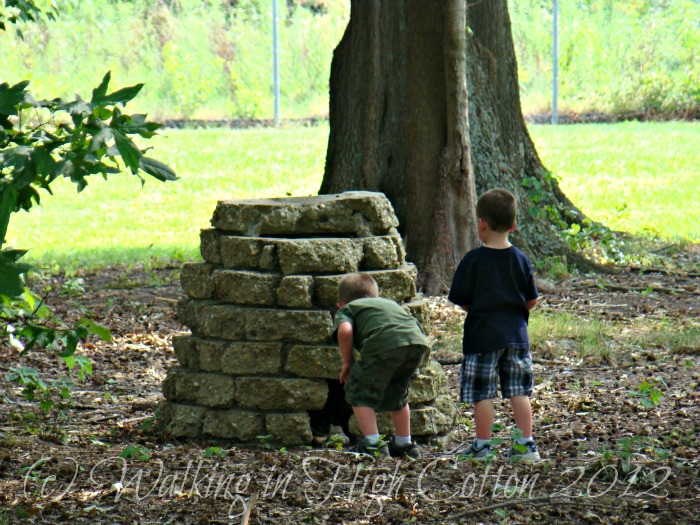 …”Maybe we can chase him out!”

I had also picked up a copy of Seven Alone, a movie adaption of the story. Do I think it added dimension and interest to the topic for the kids? Yes. Would I buy it again? No. Most of our discussions were about discerning truth from fiction and comparing and contrasting the liberties the movie took with the story to the book–which was almost completely based on primary sources. Valuable conversations, but I don’t think the movie really “brought the story alive” like I had originally imagined.

I really, really think this story deserves a remake!! 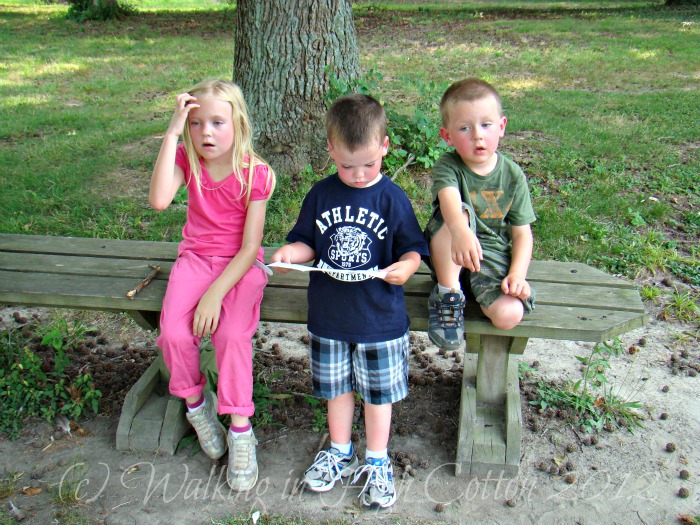 Even hot, sweaty, and tired, they’re busy plotting out their next adventure.

The last couple chapters of the book were pretty deep. The story is true, but not necessarily “happily ever after.” (which is usually the case when the story is actually true!) There was a lot for the kids to sort out–Speedracer actually fell asleep and missed the last chapter and conclusion. But as we discussed why the Indians did those horrible things and all the tangled events that lead to 1847…it concluded so beautifully when my Cowboy said “Because everyone needs to think more before they get angry. Like I need to think more before I get angry.” 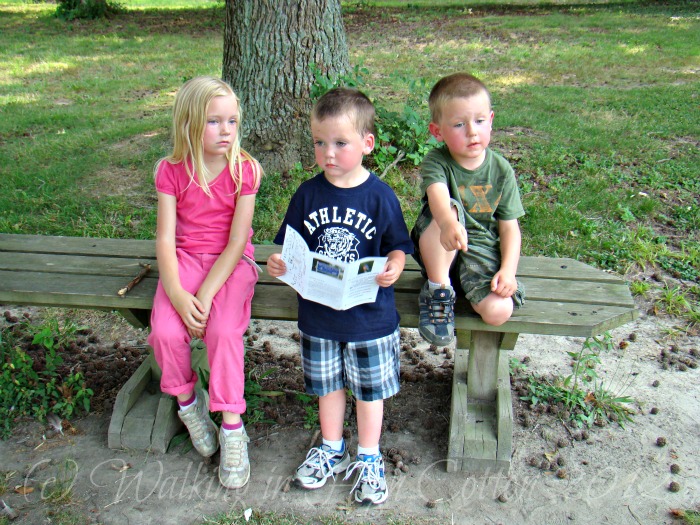 What else can we find to chase, poke, throw, or otherwise harass?

There are so many additional activities we could have added to make this more fun. So many different directions we could have taken. But I’m still learning how to find resources and plan our days to include it without bogging us down in “more school work!” It’s a careful balance, but each book we read we’re going a little further into it. A little deeper. We’re heading off to Mimi’s house this weekend and we might be taking a mule-wagon ride on Saturday–weather permitting. Wouldn’t that be an awesome way to conclude this book?

Next we’re off to read about Pocahontas and Jamestown–and since we’re right across the James river I see a field trip at the end. I think this is also a great way to change topics before they get bored, but continue exploring the deeper questions of the relationship of “white men” and “Indians” in American history.

If you could pick anything, what subject would you want to study?