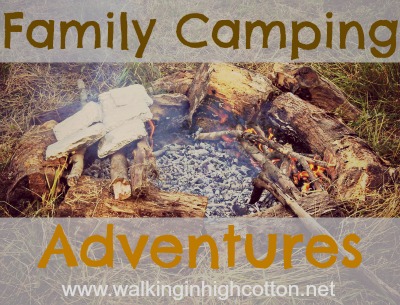 While we were dating, Mr. Fix-It and I did a lot of day-hiking. So after we got married and he suggested we go camping, I was excited but thought it was no big deal.

Turns out he meant “let’s go backpacking” and there’s a huge difference!

But it was still fun and we went often. We didn’t do any week-long excursions or anything, but we would take the dogs and head out for a weekend here and there. Then we got busy with moving, building a house, starting a farm, and having kids and our packs and equipment ended up just being something else in a tub in the attic.

This Christmas we decided our family needed more time to recreate together and that was one activity that we enjoyed that we’d been missing. So we updated some of our equipment (turns out backpacking and camping as a family of five is completely different than as a young couple!) and decided to start some family adventures this summer.

I’ll have series of posts over the next two weeks to share our adventures in family backpacking, including our tips and lessons learned; planning, packing, and gear; and moments for learning. 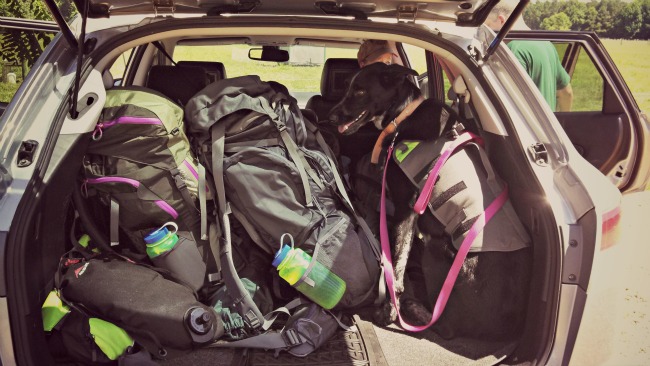 We loaded everything up–including Penny!–and headed out on Saturday morning.

We started out easy with an overnight jaunt over to my father-in-law’s tree farm down the road. I think it ended up being a great choice–ticks not withstanding. We drove in and parked right by the gate and then hiked around the fields and trees for a while before picking a spot to set up camp. (Did you follow any of our prepping for the trip on Facebook?) 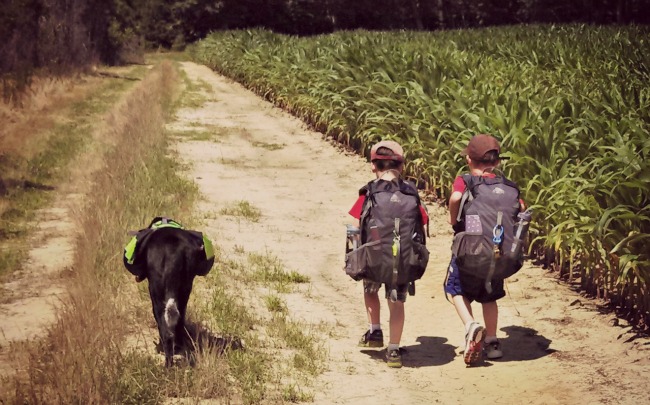 I think this is absolutely my favorite picture! {smile}

The kids carried their water bottles, their sleeping bag, and their nature notebooks. Mr. Fix-It and I carried pretty much everything else. Speedracer only lasted around the first corner. But we expected that. That’s why we’re starting out small. Mr. Fix-It carried his pack and left him with his water bottle, and we marched on. 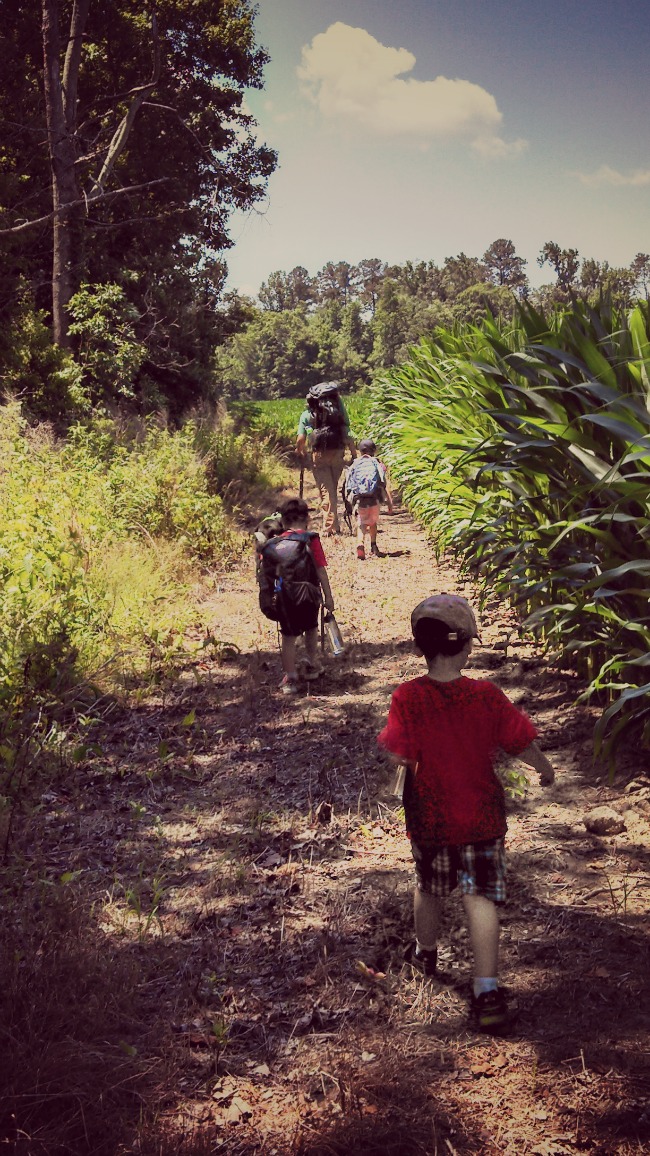 Mr. Fix-It was leading the way and I was bringing up the rear. And Penny was the out-rider running up and down and back and forth.

Penny also carried her own food and water in her new backpack. Penny was another reason we camped at the tree farm first. We wanted to see how she would take it and how she would behave. Over there, she got to just be herself and didn’t have to be on a leash or anything.

And she behaved wonderfully!!

When we stopped to rest, she flopped down to rest. When we hiked, she hiked. When we made camp, she stretched out and took a nap. When the kids when to play or gather firewood, or go to the bathroom, she hopped up and trotted along. She slept outside between the two tents all night without a peep. 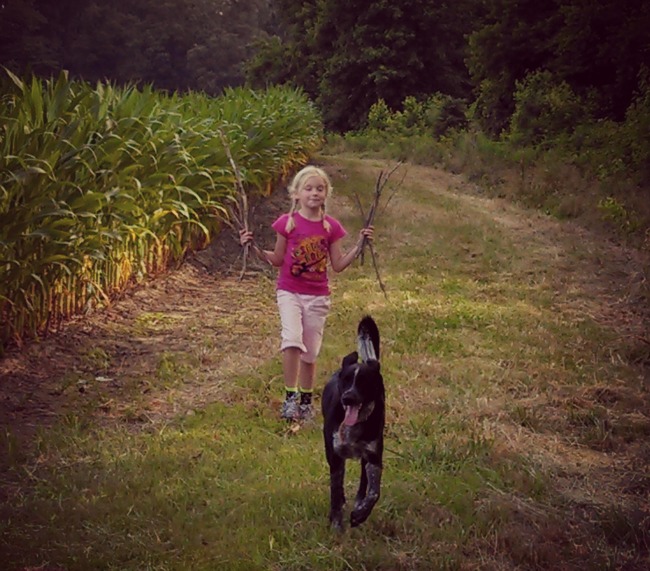 We also picked the tree farm because there were no rules about camp fires. We have a backpacking cook stove, but we thought the kids would really like a campfire the first time.

Well, except for that wolverine incident. Then she immediately jumped up and raced into the bush to chase it off–but she came right back.

You didn’t know there were wolverines that wouldn’t kneel over dead in the humid summers of coastal Virginia, did you?

Well, regardless of Mr. Fix-It’s “pshaw, that was just a fox,” I have seen enough NatGeoWild to know that we were in eminent danger of being mistaken for a half-frozen hunk of moose haunch if Penny hadn’t thrashed her way through the weeds to protect us. (I mean, what wolverine in his right mind would want to face the wrath of one skinny black farm dog with an overly enthusiastic tail?) After about an hour he stopped prowling around (or I fell asleep) and Penny kept a watchful eye on things–

Since Mr. Fix-It was long since snoring away. 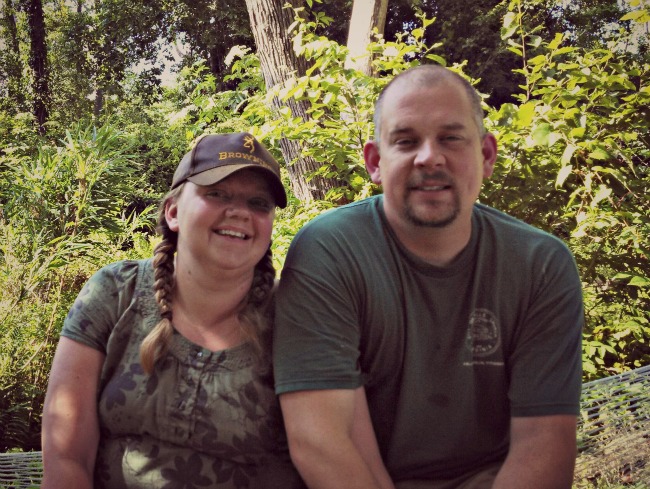 Mr. Fix-It and I haven’t taken a picture together in a long time! I’m usually behind the lens!

The kids were overtired from the excitement of it all and didn’t finally drift off to sleep until around 10-11 pm, so we packed up a little earlier than expected on Sunday and headed home right after breakfast–instead of being home at lunchtime. The Ladybug was disappointed, but I was glad to call it quits before the boys got much farther out of hand. They had played at the little creek by our campsite all afternoon without a nap and no one made a single complaint about the heat or the bugs but by Sunday morning, they were getting crabby.

We’re already planning our next overnighter, with an eye toward a few longer trips this fall after the lamb harvest (when the weather will be a little nicer!). The kids are very excited about going again, although we’ll be making a few adjustments. As I’ll be sharing, we over-packed on food and under-packed on water and bug spray.

I’ve got a great Camping and Backpacking board going over on Pinterest if you have any great links to share in the comments. Wednesday I’ll be posting about food and water–including our menus and packing list, as well as lessons learned for next time. In the meantime, I’d love to hear about your family camping adventures!