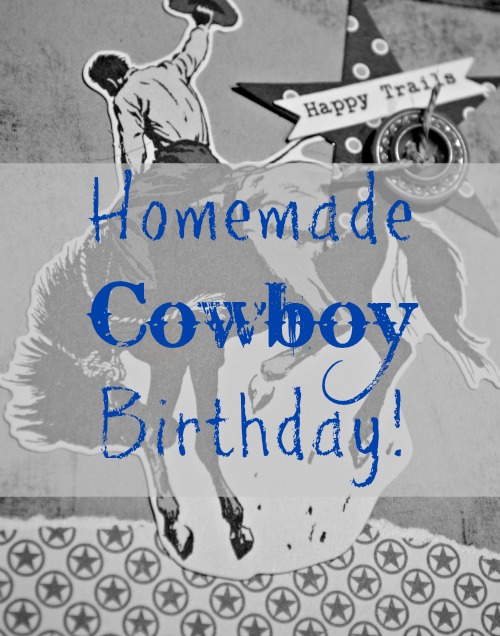 As I mentioned before, we don’t do birthday parties every year. But this year everyone gets a party. And the Cowboy wanted a cowboy party. Naturally.

I think we were able to pull it off pretty well. Pinterest was a bit of a help to me–but honestly, in this case it was also a bit overwhelming. I’m…speechless…at the lengths some parents are going to for birthday parties. Especially for 1, 2, and 3-year-old who won’t even remember it other than the pictures in their scrapbooks! But I digress…

Most of what we did was with some inspiration from Pinterest, but not directly from there. And most of what we did was make do with what we had and what we know and what we’re good at, so it came together fairly easy and stress free–which was a pretty big deal since the weather has been awful and outside activities were pretty much out of the question.

To begin with, I made the invitations again–and the guest list was fairly small. I was touched that the Cowboy’s invitation list included friends ages 5 (his brother was actually on his invitation list!), 7, 8, 9, 13, and all the way to 18 (his babysitter, Ms. Maya, was also on his invitation list!) He is just totally his own person! Each invitation ended up a little bit differently, and we had one girl guest that I tried to address. {smile} I used the Sasparilla scrapbooking series from October Afternoon as the basis for everything.  I had ordered a scrapbooking kit months ago from Peachy Cheap with no idea how to use it, but knowing it suited my family well and I couldn’t pass it up at 70% off! 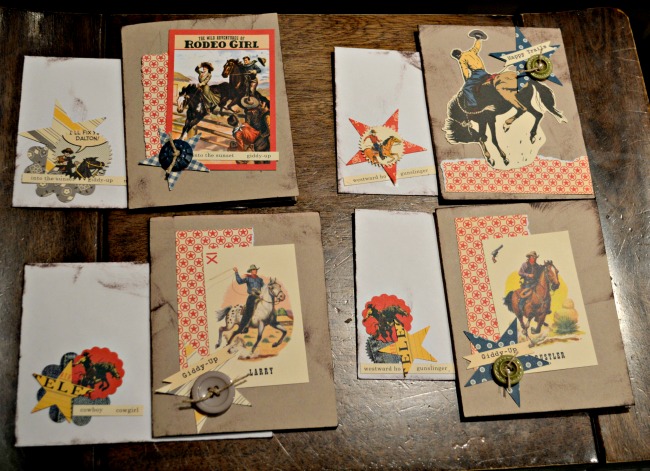 I was really happy with how these turned out! One of the few things I’ve done that ended up exactly how I imagined when I started!

I used the same papers and “miscellany embellishments” to decorate some mini composition books (3 for $1 at our local dollar store–I keep a regular “stash” in my workshop!). These little babies are 3″x5″ and are perfect for party favors! They can be for boys or girls depending on what you do with them, and the kiddos love the mini size. I sewed some “fashion” elastic (you know, cheap colored stuff that’s great for crafts but terrible for clothes) into little closure bands because the mod-podge tended to make the front cover flap open. (See goodie bag pictures further down.) 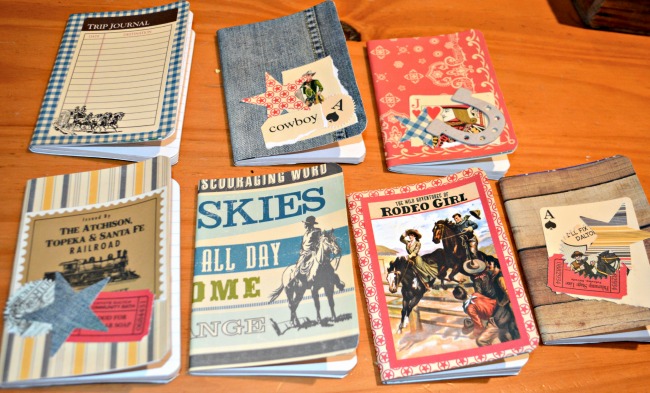 I think these turned out really well too! I mod-podge over top of everything a few times to make them sturdy for little hands.

I did break out my star punches from Stampin’ Up because I ran out of pre-cut ones in the right colors. they were working great as off-set coloring on each item, so I just punched a few more from my paper. Eventually, I also used the leftover paper scraps for some gift tags too. Just fold a scrap of paper in half and stick on a few patterned shapes. Voila! 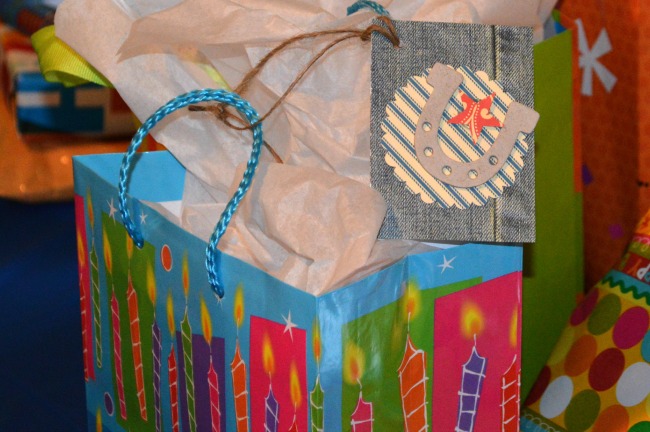 I sewed up fabric “goodie” bags again. This time (unlike the Ladybug’s bags) I used a home decor fabric and only made a single layer–no lining. So I used a slightly modified version of this pattern for a drawstring backpack. If you shop carefully, these do not have to be expensive! The cowboy fabric was only $4 a yard with a coupon and it only took 1 1/2 yards to make 7 bags. I ordered the chevron fabric for something else and just used it for one bag for our girl guest.

In the bags we put a bandanna (check your dollar store!), a notebook, two cowboy boot pencils, a handful of plastic cowboy and Indians (we got a big bag and divided it–much cheaper!), and a couple of beef jerky sticks. I also had my heart set on these little cowboy sticker books (because I love Dover products!) but they kept getting back-ordered, so we moved on.

The party was after lunch and before dinner, so we kept the food simple. We had juice pouches for drinks and bowls of popcorn Chex-mix–which was easier and cheaper for this time of year than regular “trail mix.” I also put out some beef jerky, and it went fast! Our Cowboy requested an ice cream cake just like the Ladybug had, so I made that and we put a rodeo toy on top. I found this one at our local tack shop. Be sure to check for local resources if you’re doing a western theme, any feed store will usually carry a few little toys. 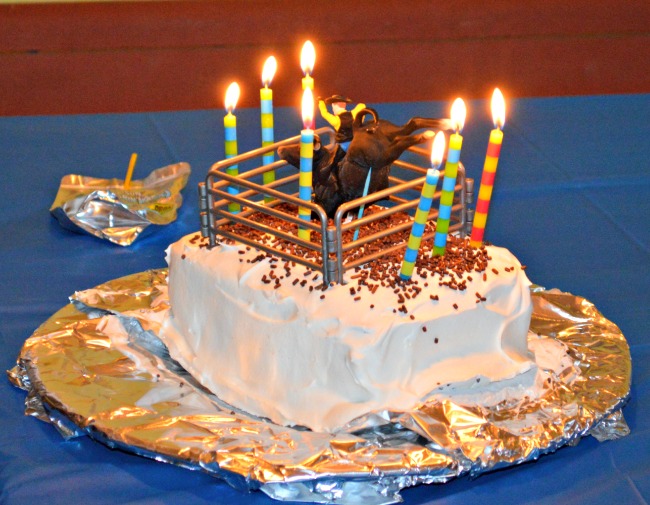 I like using a real toy on the top to make it something the kiddos can enjoy later too, but it has some challenges. The toys are usually heavier than regular cake topper decorations. The good news is sometimes you can get the toy base to freeze into the top when you’re making an ice cream cake, but the angle of that bull was going to be hopeless without a little help–thus the blue toothpick! {smile}

While I did have some cowboy-themed games in my back pocket for emergencies, the main feature of the party was watching a John Wayne movie. (The Cowboy eventually settled on Chisum. I said no to The Cowboys because I didn’t want anyone going home talking about “soiled doves.”)

So we set up a little straw bale movie theater in the living room. This idea came vaguely from some Pinterest wedding seating ideas I’ve seen. We spread sheets on the living room floor and brought in some straw bales as seating and made some simple saddles to go with the cowboy theme. 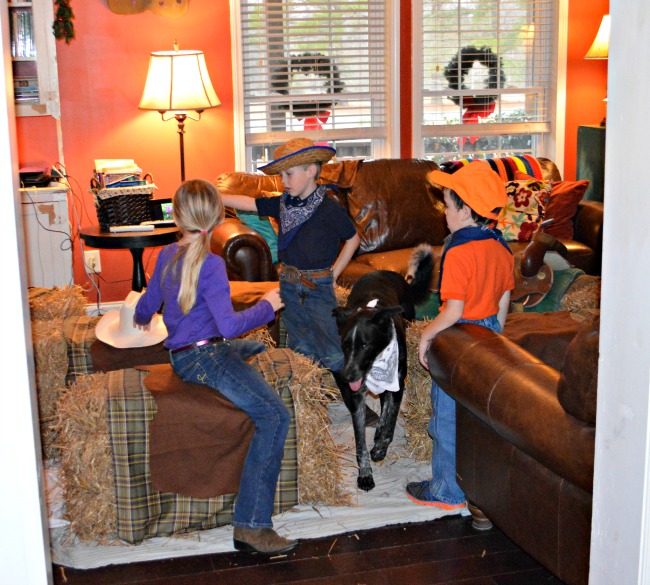 The birthday boy got the real saddle. 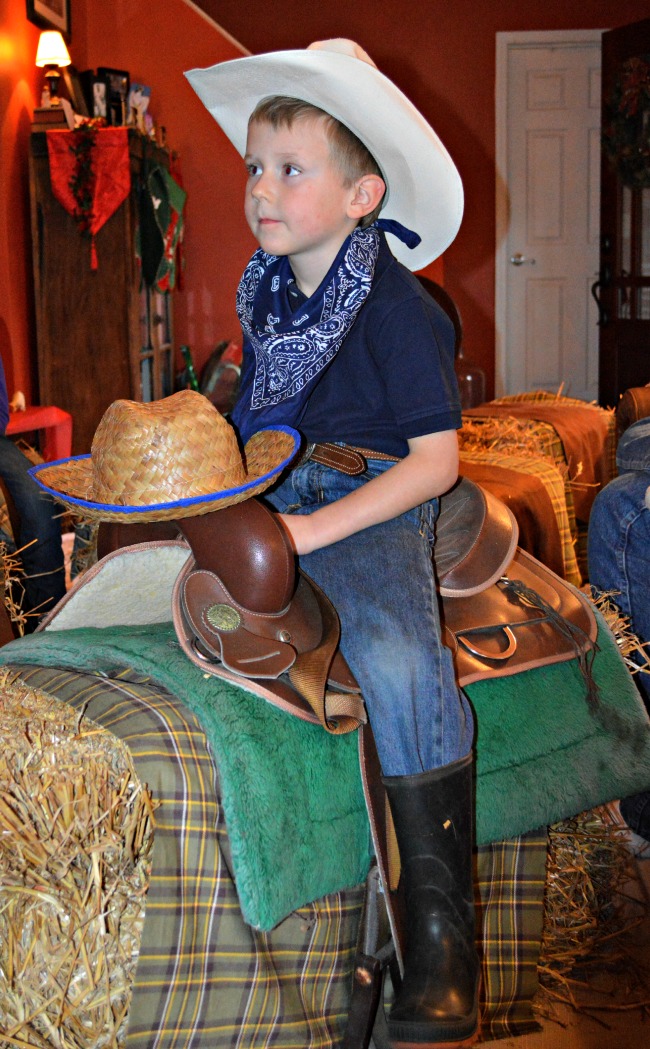 Everyone else got “saddles” cut out of fleece. Um…I think they were a hit… {smile} 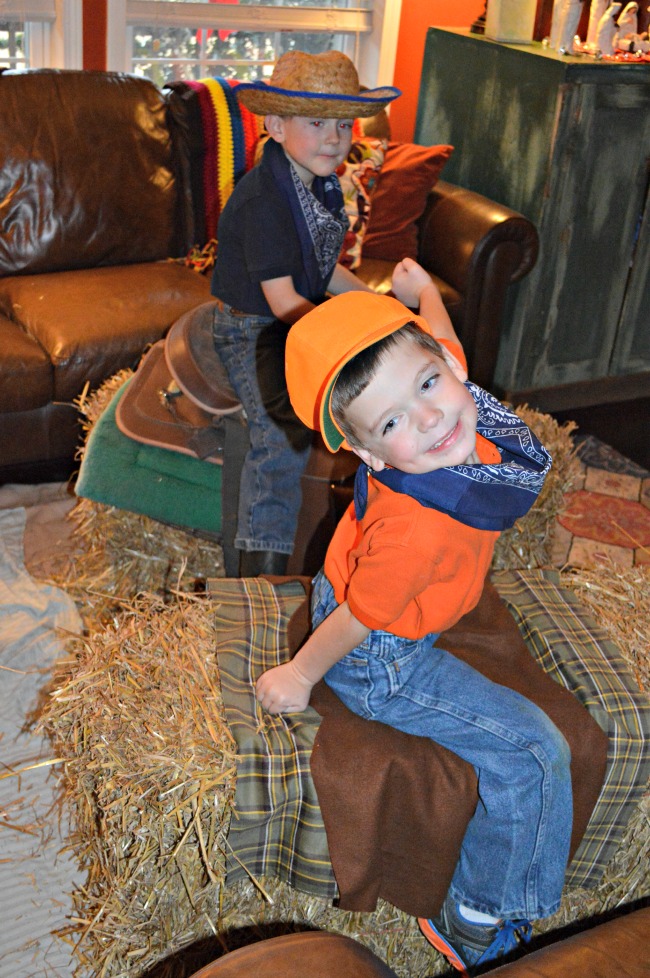 I found the plaid on the clearance table at our local fabric store and everyone has fleece on sale right now. So with a coupon, we got all the fabric we needed for about $2/yd. Granted, it took about 4 yards of fleece and 3 yards of saddle blanket fabric, but that’s still only $14. And we’ll be turning at least some of the plaid into a dress for the Ladybug. (I have no idea what we’re going to do with 6 kidney-shaped fleece “saddles.”) And the straw is already out bedding the barns, of course.

The saddle blankets are just 1/2 yd cut the width of the fabric. Just a rectangle–took 10 minutes to cut them. And technically, if I had known the 1/2 yd measurement when I went to the fabric store, they could have cut each one that way for me!

For the saddles, Mr. Fix-It drew a kidney-ish shape on to some freezer paper, which I then cut out as a pattern. The great thing about fleece (besides that it’s really cheap right now!) is that you don’t have to sew it! We just cut out the pattern, Mr. Fix-It did a little quality control trimming, and we were done. No sewing required! 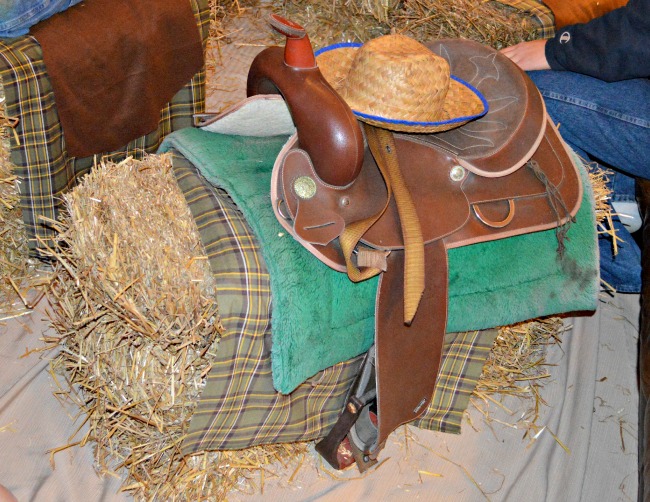 As far as games go, our time frame ended up not allowing much. But I had planned two games.

Mustang Wrangling–You stick a stick-horse into a straw bale and then the kiddos try to “rope” the horse by throwing a hula hoop with a rope attached over the stick-horse head. Each time you make it, you back up a pace and try again. When you miss, you’re out. Last one standing, wins.

Speedracer’s party is up next in January or February. Wish me luck. Last I heard, he wasn’t a Super Hero-Angry Birds-Sea Animals party. Um…yeah…{smile}

I’m pretty happy with how they’ve gone so far. I’m finding that when we plan the party at home, around our strengths and resources, they seem to go pretty smoothly. The Ladybug’s backyard nature party was a hit, and the Cowboy went to bed happy with his party as well (although his new Legos might have had something to do with that too!).

If you’d like any more directions or clarification on anything we did, let me know!