This past weekend it rained all day on Saturday. A steady, dripping, gray curtain over the whole place. I’m glad no one decided to lamb in that mess. We moved the sheep to the top field to get them out of the mud from the last few days.

Then the sun came out on Sunday. Everything was still mud, mud, mud, but we couldn’t wait to get outside. After church we took a little Sunday drive around the County (a lot of folks had a lot more mud than we did!) and then tackled some chores. The Ladybug and Speedracer had homework and inside chores as well, but the Cowboy headed outside with Mr. Fix-It and didn’t come in for about 3 hours. 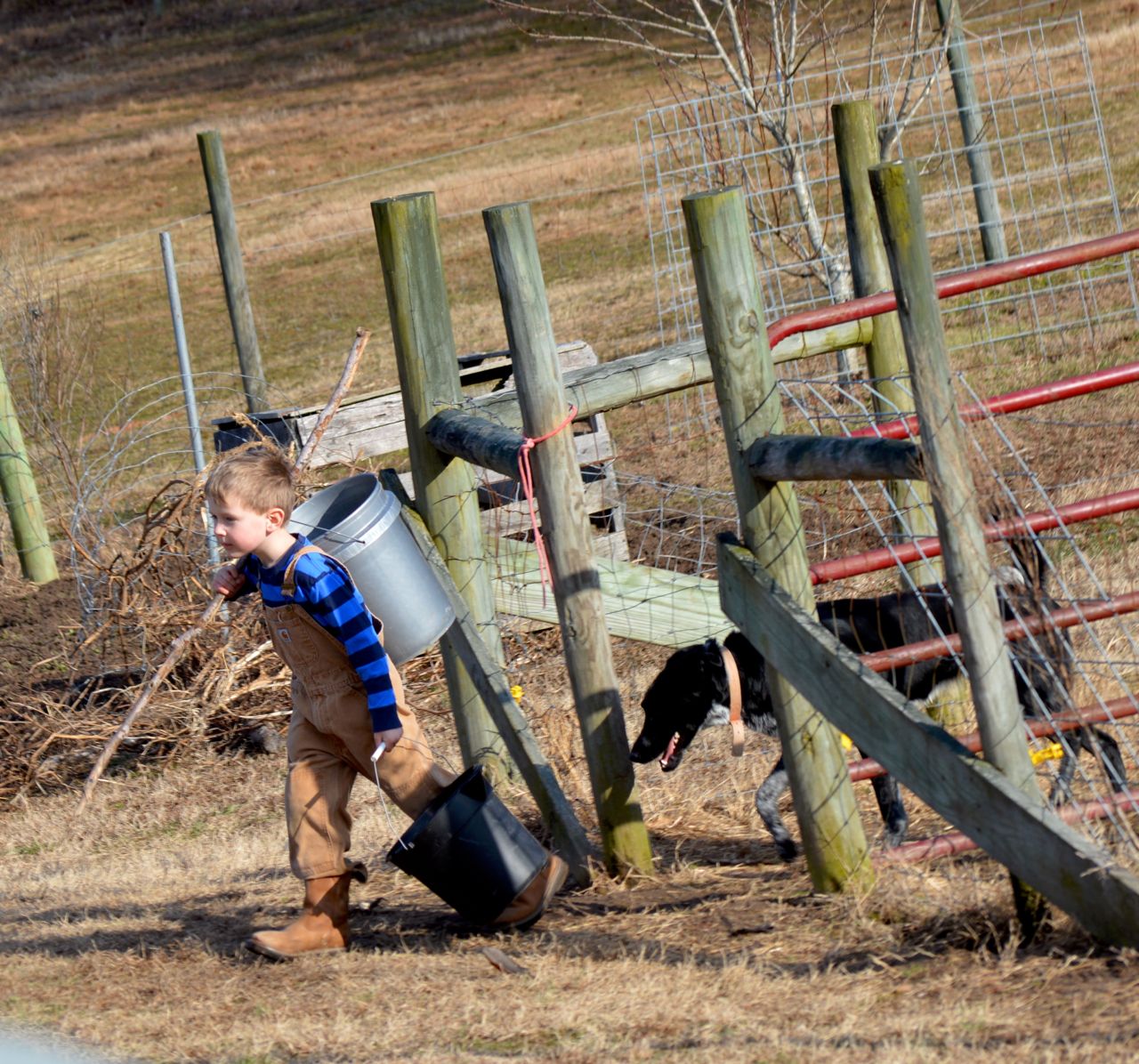 Penny was thrilled to have “her people” outside with her! She tagged long everywhere.

Mr. Fix-It has caught the spring gardening bug again and tilled up our plot. We’re hoping for one more good freeze before planting time. It would kill off any weed seeds that we tilled to the surface. We could also use another good freeze to kill off another round of parasites and pests around the farmyard. We don’t expect it this time of year, here, but I’ve got my fingers crossed that we might get it this year and that would be a big blessing. 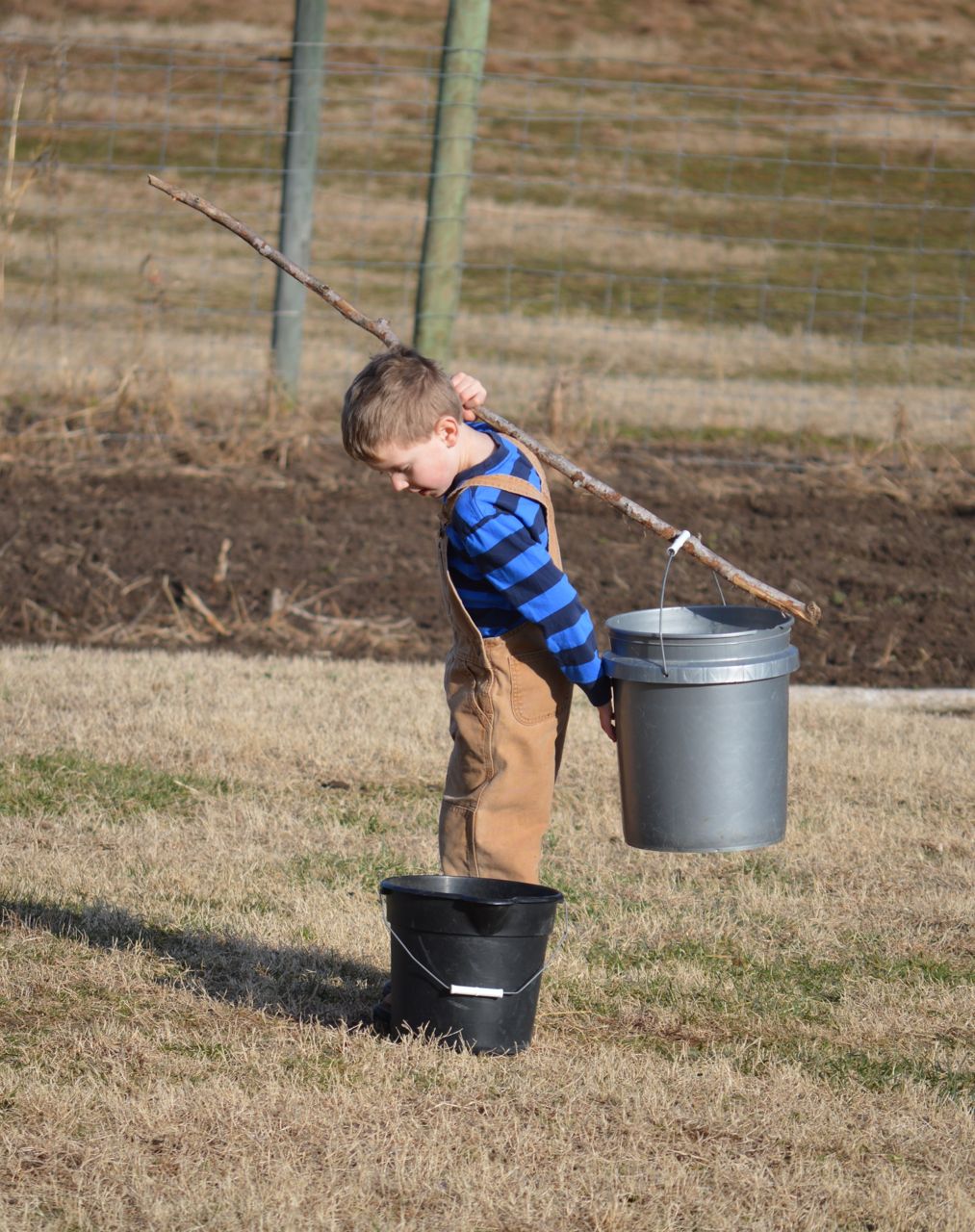 As long as they’re working diligently, I don’t say anything about them trying out goofy methods. {smile} Getting to try their own thing and experiment with problem solving is part of the value in all this choring.

Our chickens have been on again, off again, with their laying. I’ll get 2 eggs a day for three or four days and then the Cowboy will walk in with 8-1o eggs a day for a few days. I think they’re confused by the weather, but I think we’ll be looking for more egg customers in a few months. {smile} 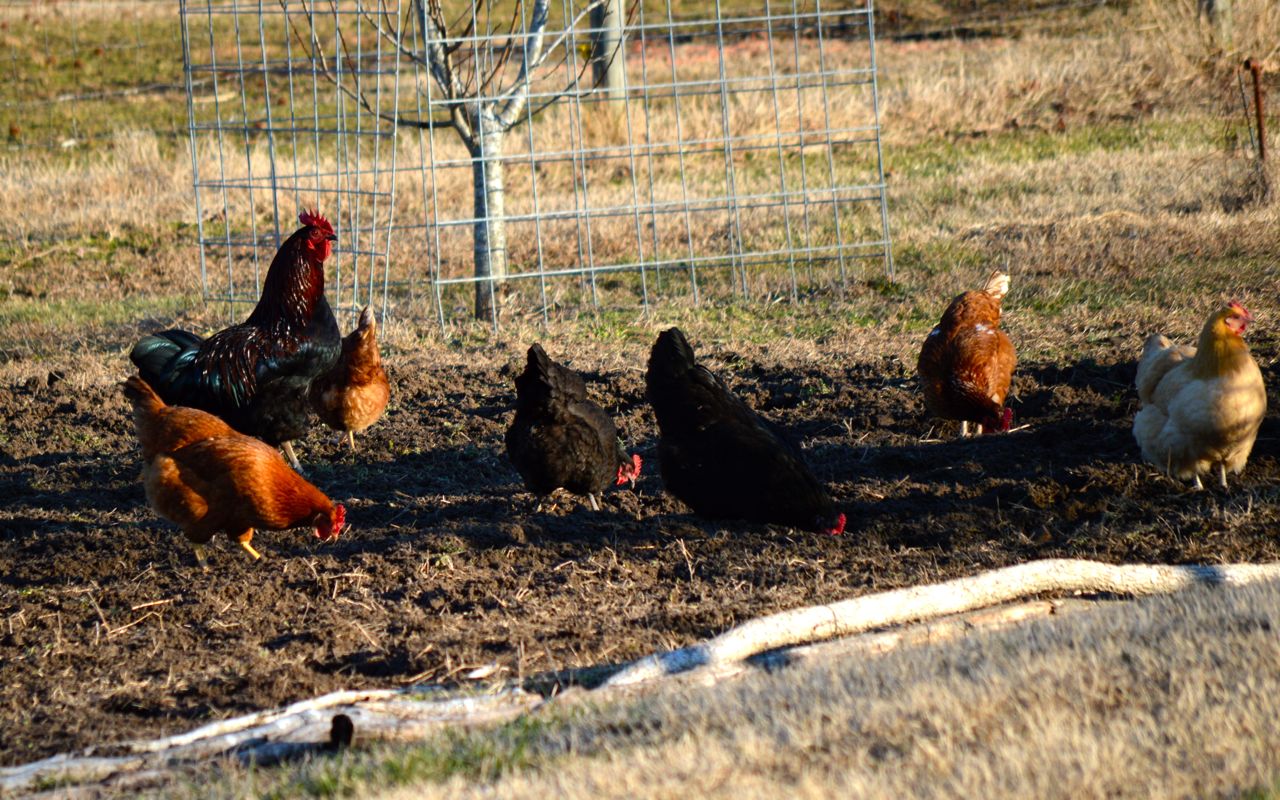 The chickens were thrilled that it was gardening time again. And we were thrilled that someone was on grub-duty. We don’t like to use any chemicals in our personal garden if at all possible, but grubs and beetles are definitely a problem.

No new lambs to report on this weekend, but the three we have are healthy and hearty and playful. The oldest is even getting to the point where his momma starts getting a little exasperated and is calling for him while he’s running off with the others all the time. The younger two will play with him, but they won’t wander as far from their momma’s yet. 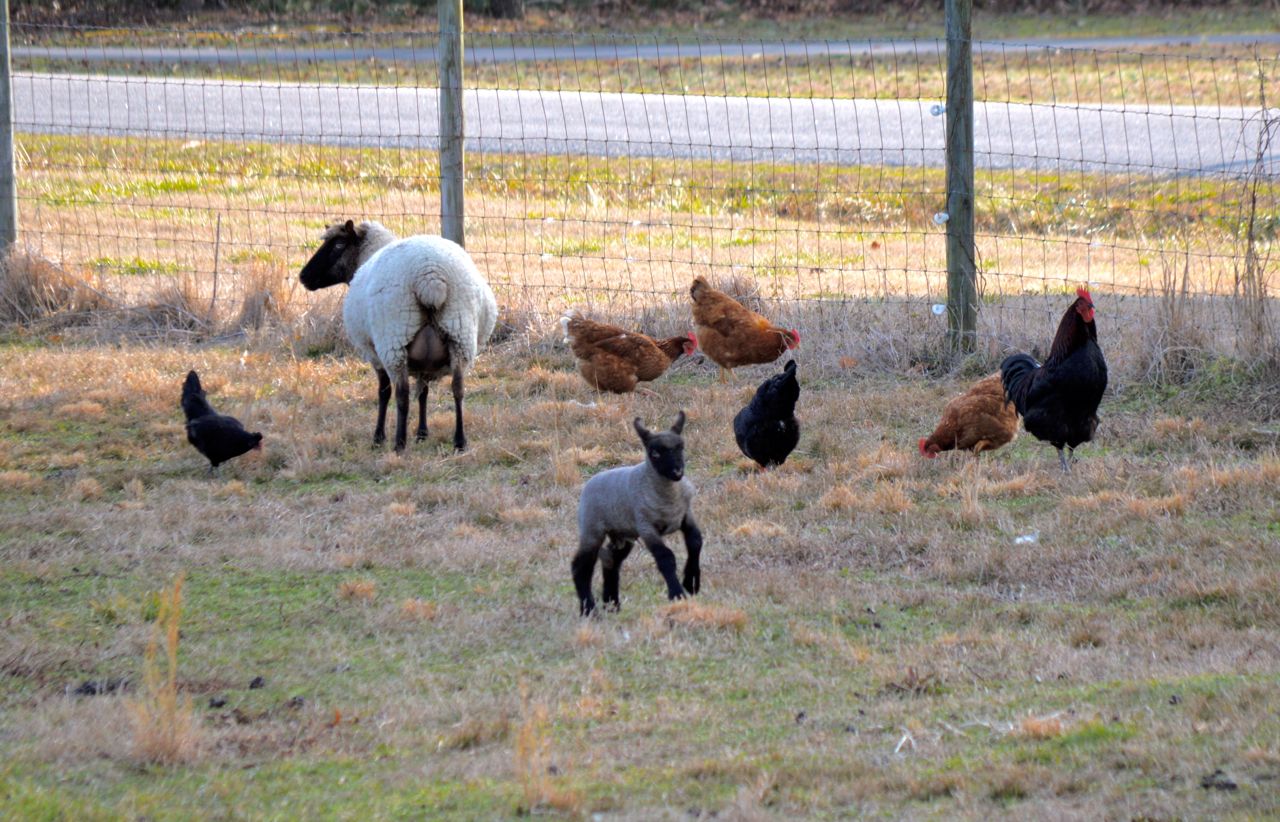 He’s a big fan of chasing chickens too, trying to head-butt them. You can see his momma back there looking around for him.

And we’re expecting more pretty much any day they decide they’re ready. 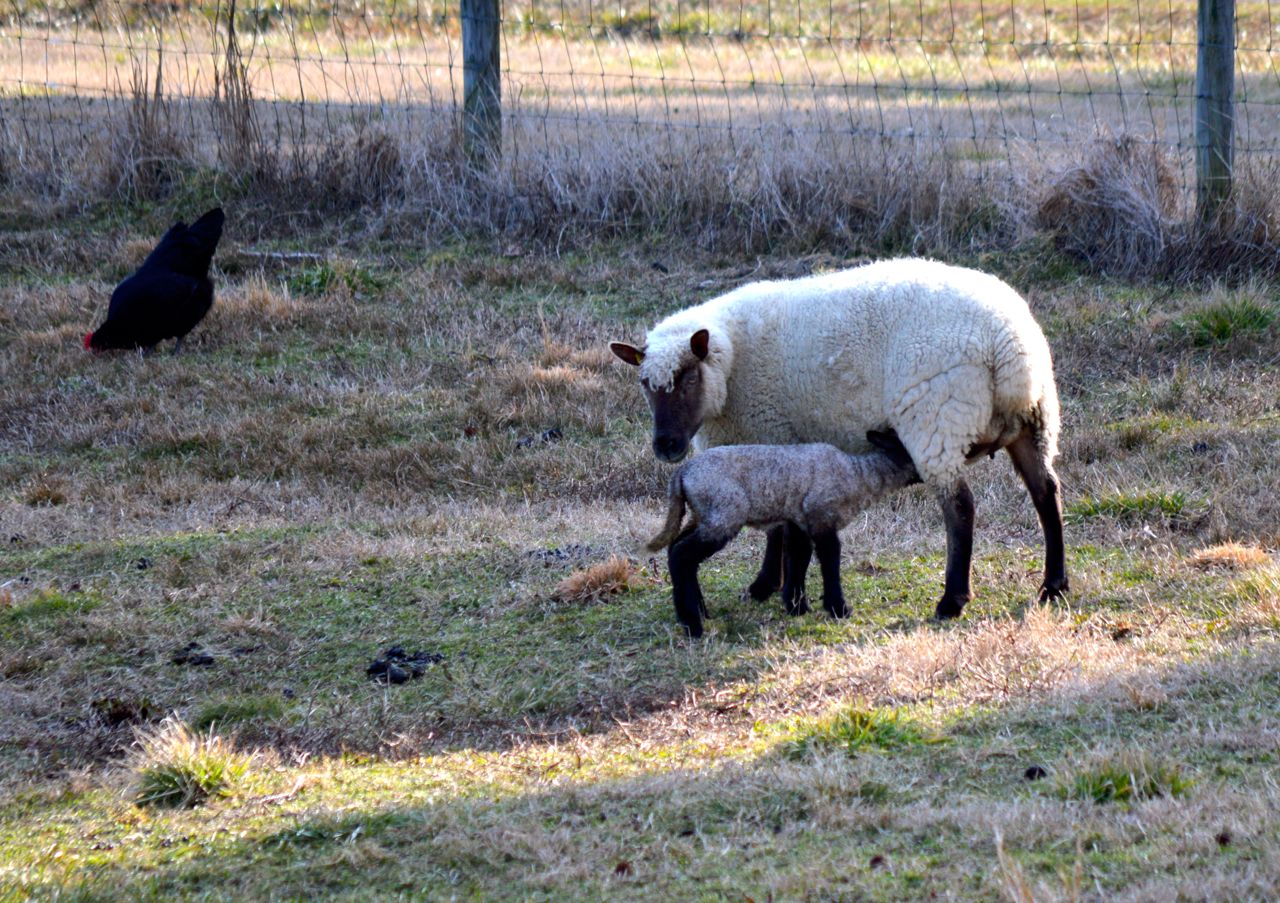 In an interesting turn of events, Mr. Fix-It has been feeding the sheep most of the time lately. He has a tendency to give me a hard time about being over-dramatic when I talk about the sheep mobbing me and the feed bucket and that one time when they tried to eat me alive and all. Ha! Now he knows what I’m talking about.

He came in the other day carrying on about them being crazy. He said that one climbed up on the feed shed gate and started banging the gate against the post–Bang! Bang! Bang!–while he was standing there pouring feed. He said you could look at her face and tell she knew exactly what she was doing and was doing it on purpose.

I said, “Hmm…who knew?” But inside I was hollering…Ha! Told ya so! {smile} 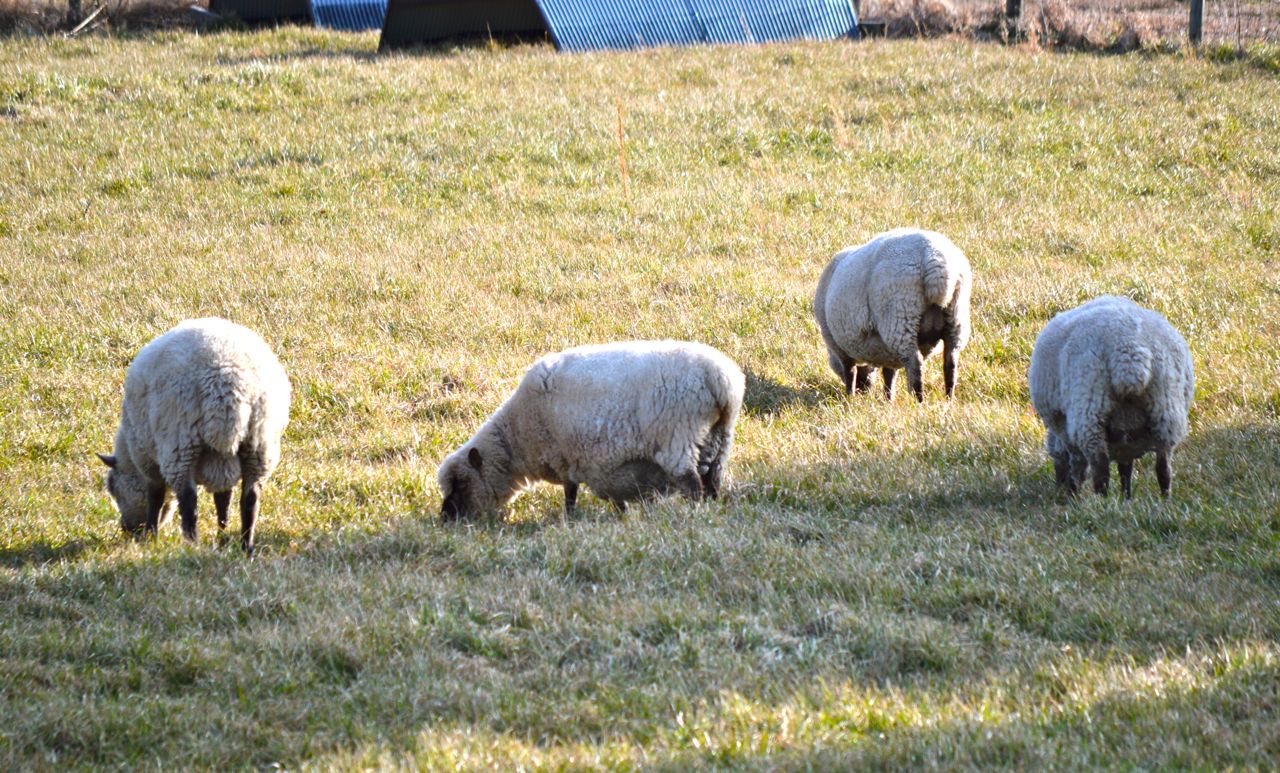 Dear Ol’ Fatty, she’s so hig her belly is hanging in the grass!

How are things around your home place right now? I know some of my reader-friends are still buried under a blanket of white. I talked to my Grandma Hohner over the weekend and she said they’ve still got over a foot on the ground and expecting more this week–and they’re only 5 hours away in western Virginia. 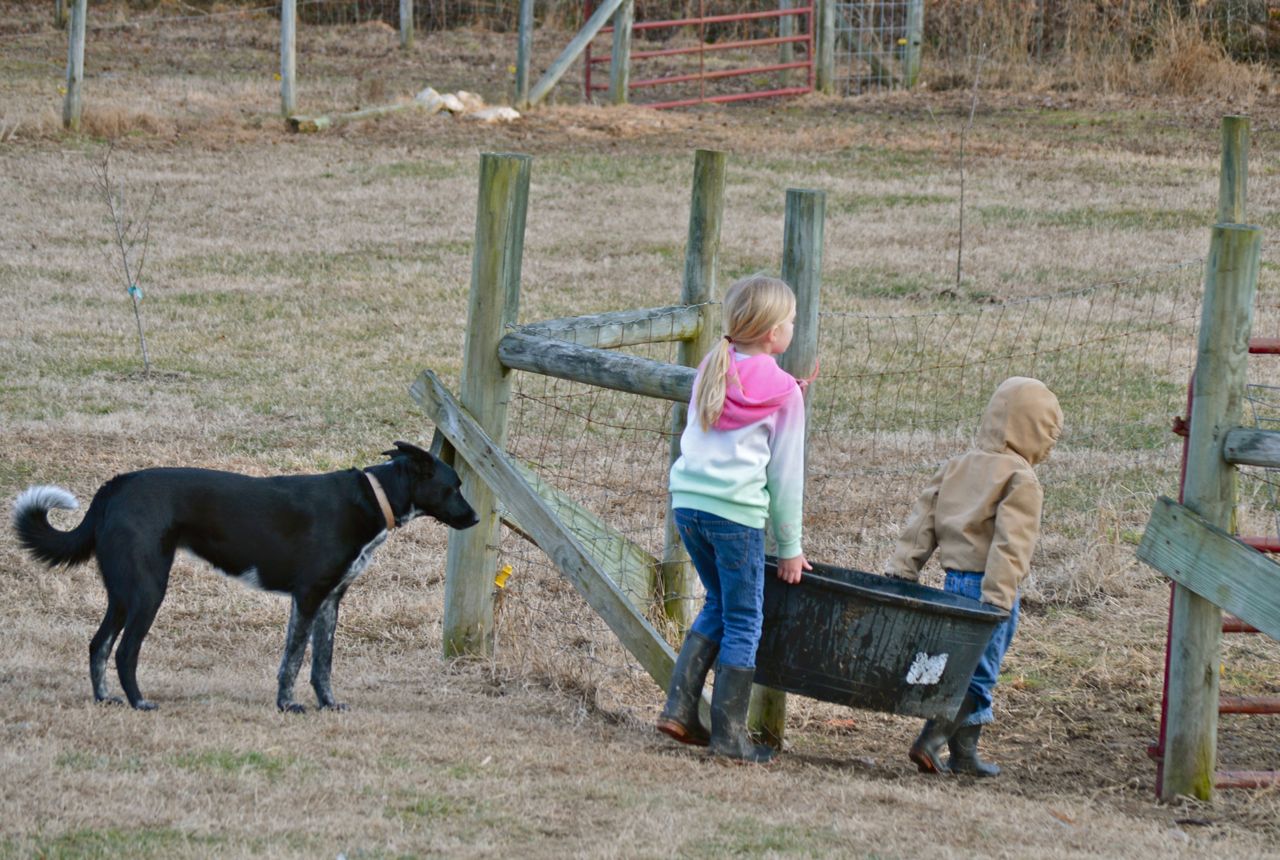 Don’t think the Cowboy was the only one working. {smile} The Ladybug and Speedracer were out there too. With Penny supervising, of course.

This week will feel like Spring around here, but I don’t think Winter is quite letting go just yet. We’ll see! In the meantime we’re soaking up the sunshine…with boots on, of course!