This past weekend the kiddos did their chores and were finally allowed out of the house to “go play!”  (Ah, the drama of an hour of chores and cleaning on Saturday morning!) 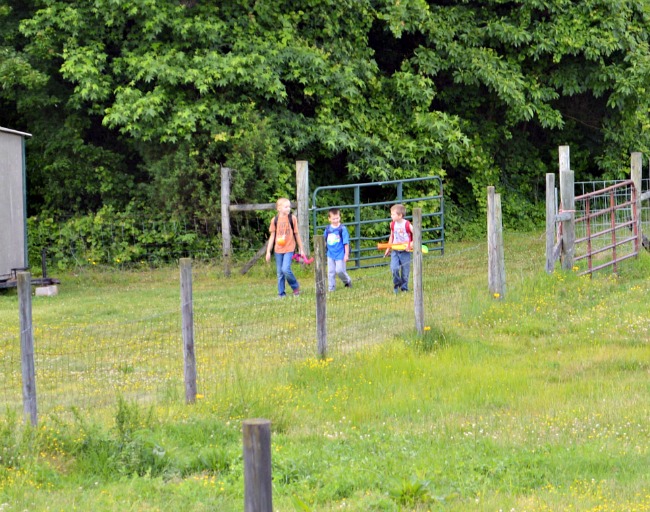 At one point, as they trooped back for some snacks, I snapped a few pictures. Besides those moments (which ended up a little blurry because I’m out of practice) my mind snapped back to something from a few years ago… 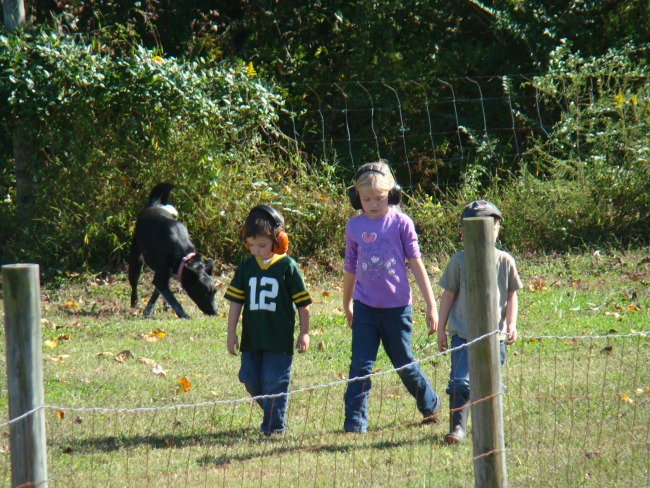 Same 3 kiddos. Same gate. Same yard. Same woods they were playing in back in 2012. 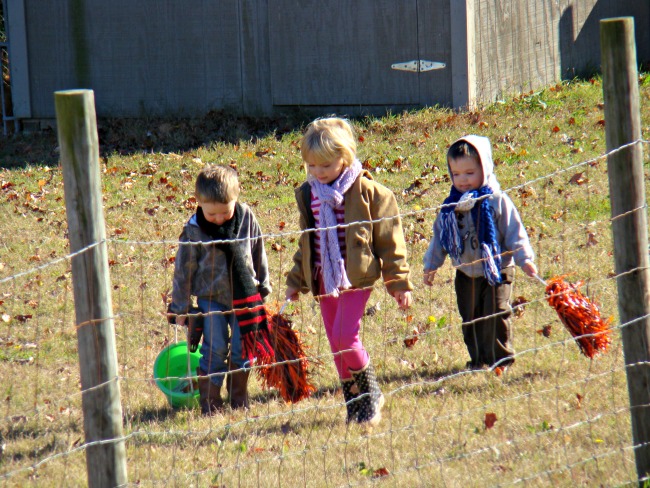 The same crew, same yard, same fence (but in better shape!)…marching back for a snack in 2010…

It occurred to me that because Mr. Fix-It and I have steadily refused video games and iPods and extra  TVs in the house, and cell phones (still can’t wrap my mind around the fact that that’s even an issue yet!)…because we’ve tried to limit outside activities to focus on family time at home…because we’ve focused our free time on the farm and being at home as a family working the farm…

Because of all these reasons plus one more–our munchkins have enjoyed a childhood that includes some of the best parts of our own childhoods as well. 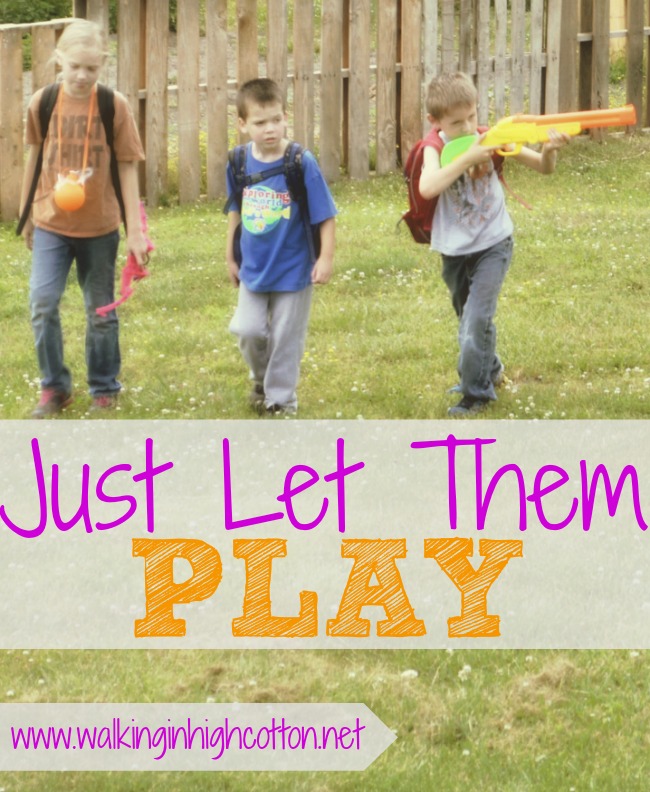 This is harder for me than for Mr. Fix-It. (Much harder!) He fondly remembers “roaming” in his childhood play times and doesn’t worry as constantly as I do. So he’s a great help to me with this. But the fact is, we let our kiddos go. Out. Without any directions or suggestions. There’s no “boredom buster” jar on our counter. No special busy bags for them to pull out. No Pinterest-worthy craft projects for them to work on. No lawn games set up. No swing set or Daddy-built tree houses.

Just them and whatever toys they drag out with them. (We do try to provide toys that are good props for imaginative play!) 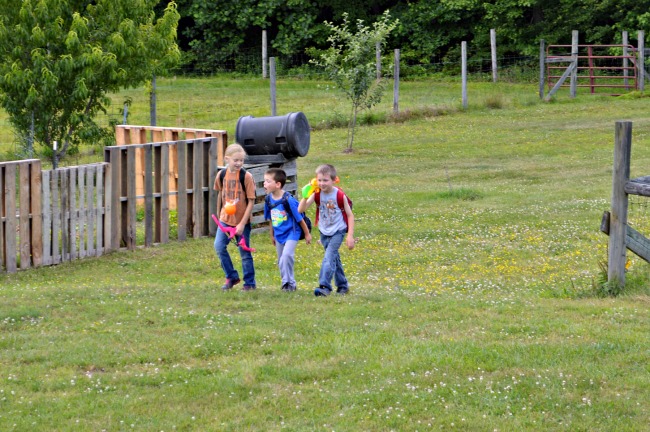 I’m not saying any of those things are bad! I’m just saying in addition to those parenting strategies, our kiddos have hours of unstructured, undirected, uninhibited, imaginative play time. Preferably outside. Occasionally they start out fussing about it, but they have thrived with it.

And yes, I mean hours. We get up on Saturday mornings, clean the house, and do chores. If there’s no special project to work on, get get to “go play.” Usually they don’t come back until lunch. Late lunch. Usually I have to call them in for lunch. Our crew has been known to take Penny and head into the woods at 9 and we don’t see them again until 1:30. I can hear them from the porch, but they’re off in the woods playing. Every once in a while I’ll holler “everybody ok?” and they’ll all pop to the edge and give me a thumbs up and go back to playing. 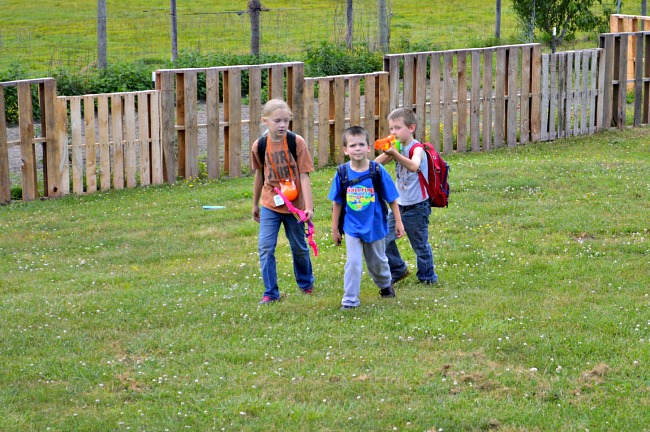 It struck me with a lot of nostalgia this past weekend. My munchkins spend their free time pretty much the same way I did when I was their age–just playing. Playing soldiers, playing Indians, playing Brave and fighting bears, building forts, making mud pies and “stew,” sword-fighting with sticks and mucking around in creeks and puddles, picking and eating mulberries until your fingers and face are all purple…I hope it’s making for a well-rounded childhood. 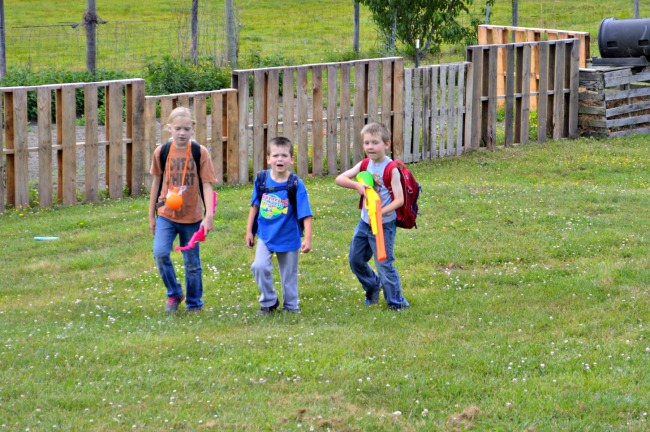 How do your kiddos spend most of their weekend time? Ours are either working on the farm with us, or playing together with each other. It’s a nice break from our busy, over scheduled week days! 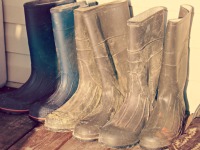