So, once again I’ve got tons of writing material from the weekend. But the moments that stick out the most for me right now are just 5 minutes before bedtime on Sunday. 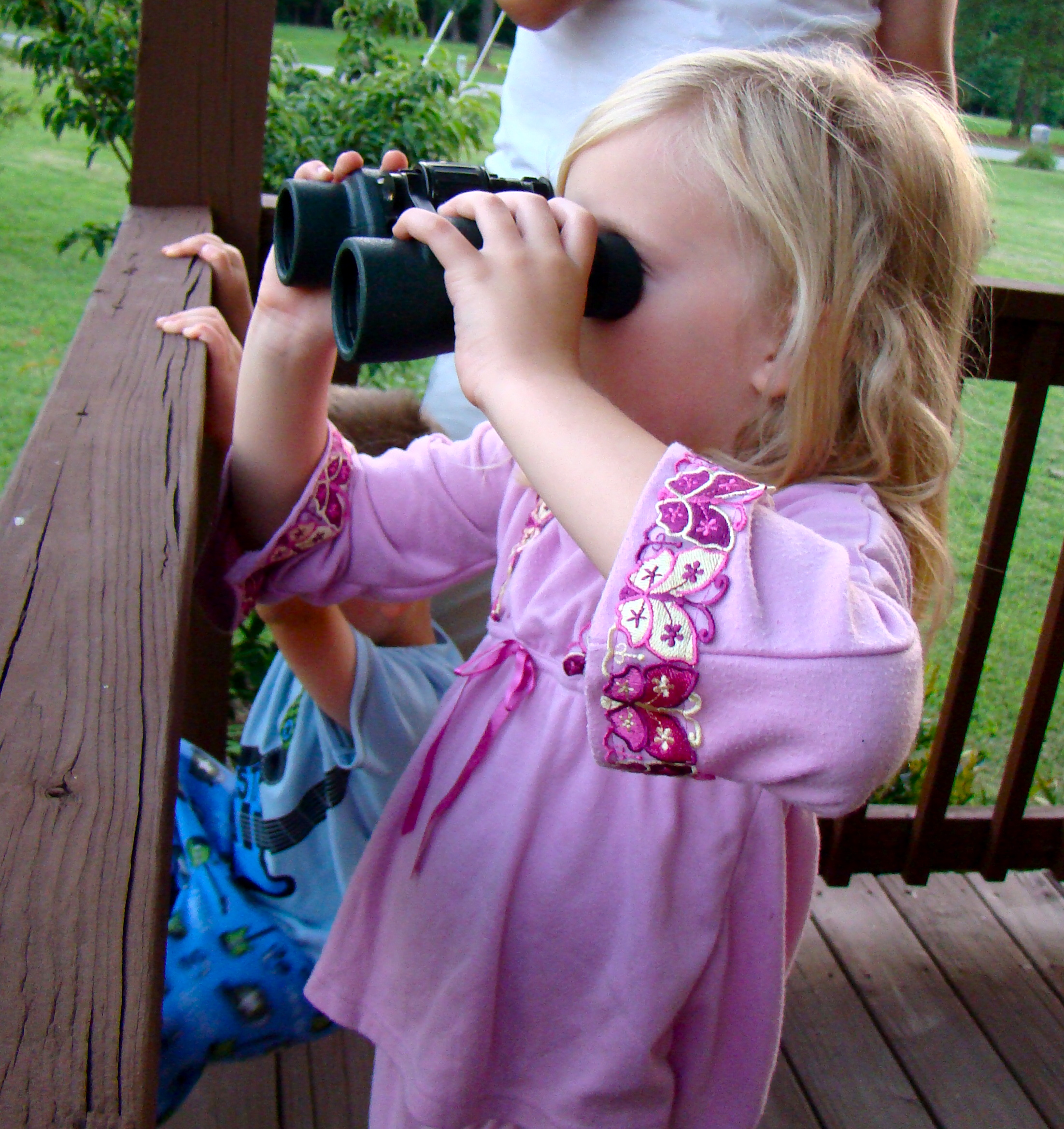 Everyone was already in jammies and heading to bed.

We were wrapping up a late dinner when Mr. Fix-It’s sister called, which got the kids a bit of a reprieve from heading straight to bed. Mr. Fix-It when out on the porch to chat to get away from the chorus of “I wanna talk to her!” 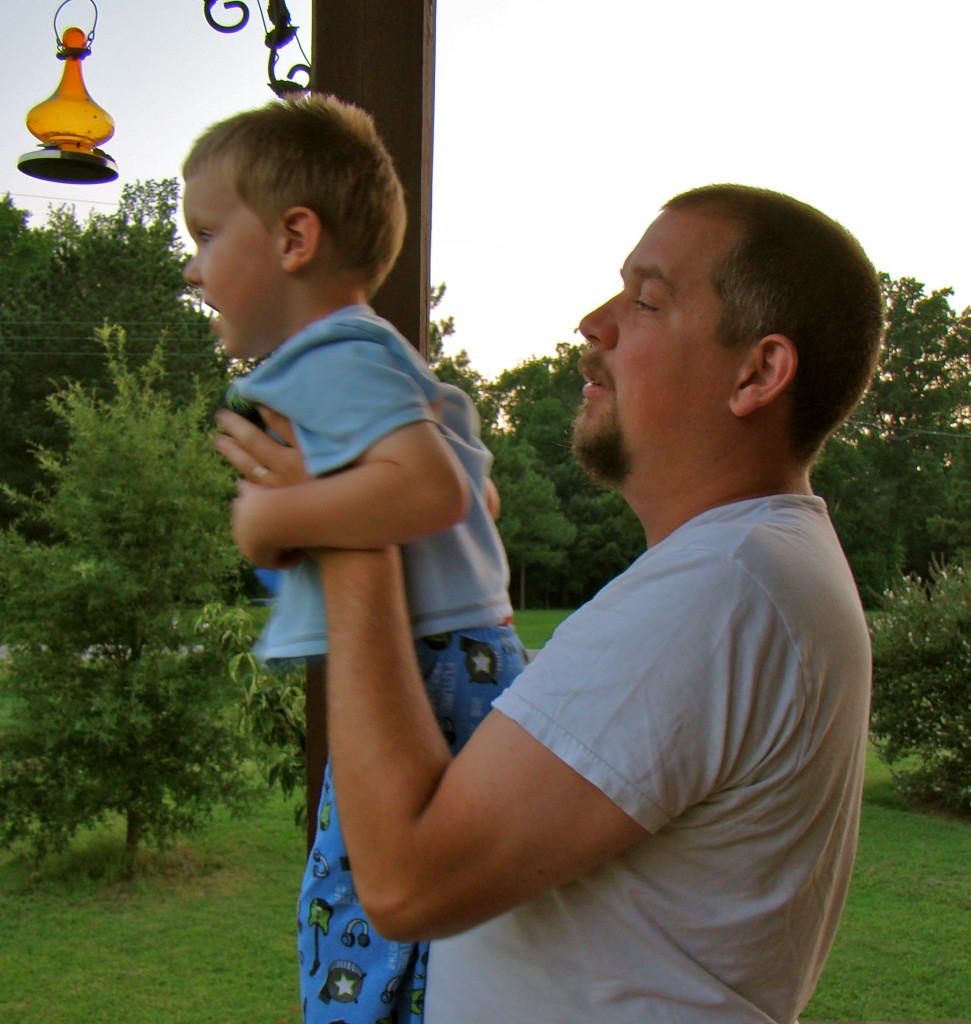 Which just meant that they followed him out, of course. Speedracer had already been excused to go upstairs because he didn’t want to eat anything we’d fixed and the Ladybug had to go get him. (This happens a lot with him. He doesn’t like anything but peanut butter, crackers, and bananas.) 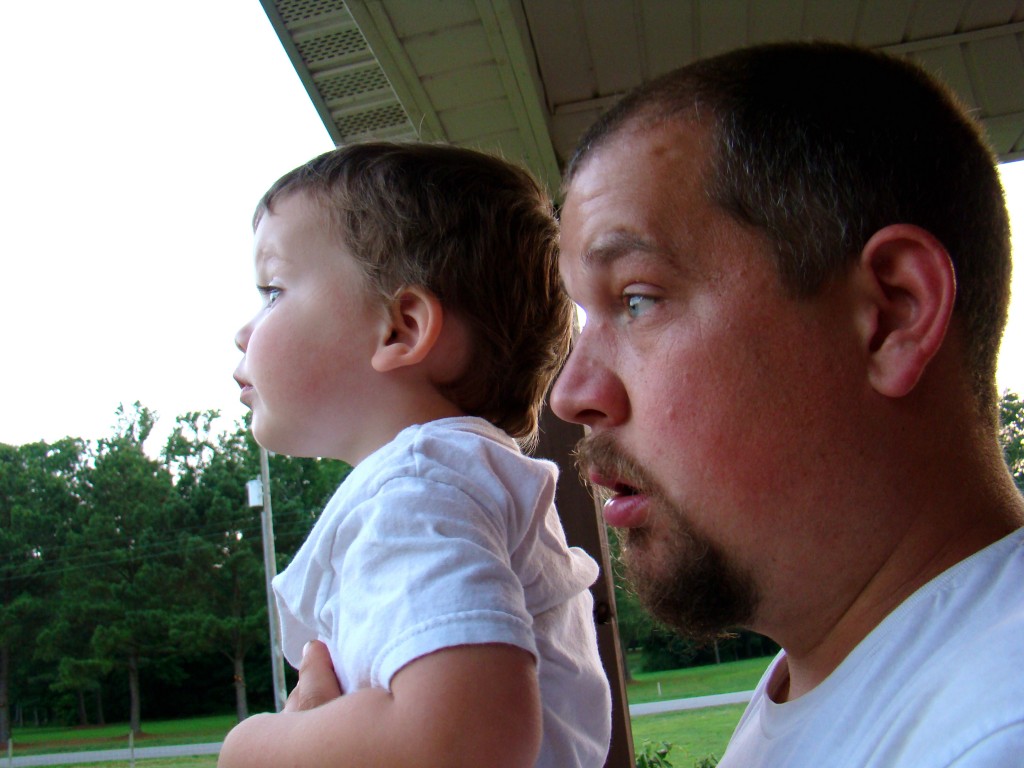 They got about another half hour out of it. Maybe more.

And you’d think we’d never see any wildlife around the house with how loud the kids are. But there they were. Eating soybeans. 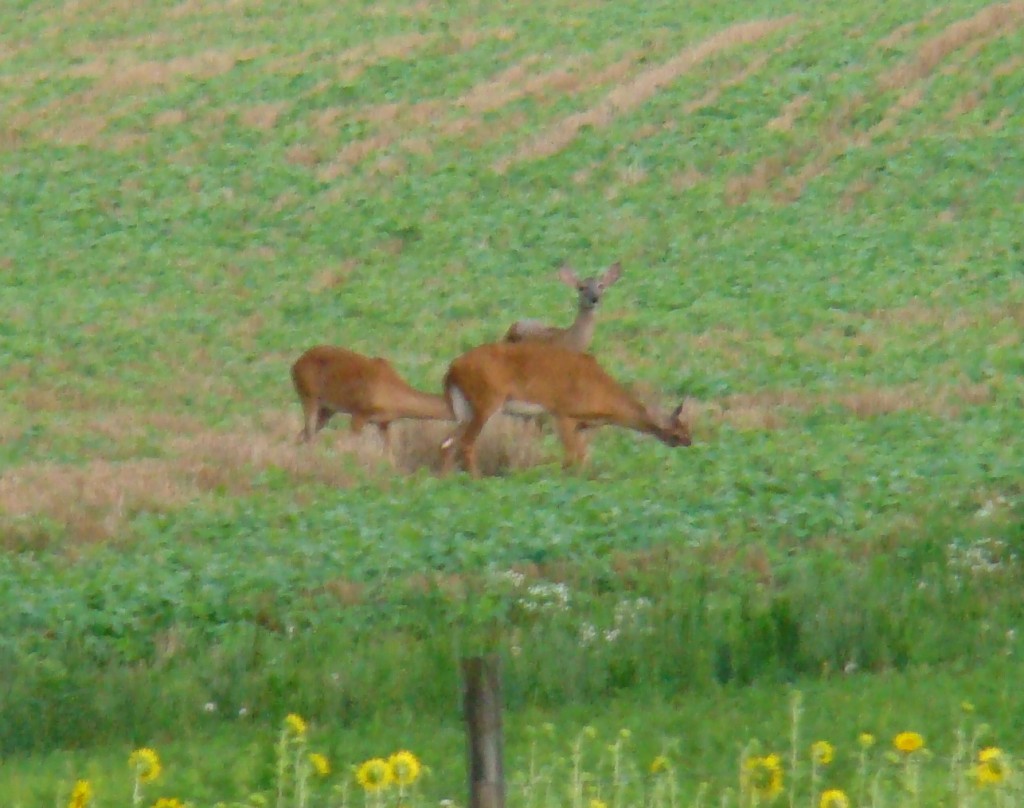 4 of them, actually. But they were pretty spread out.

Oh yeah, and you can see our sunflowers coming up. I’ve got pictures of those to show you too! But these pictures of my crew just melt my heart. (Even if they are a little fuzzy from the humidity and a low battery.) 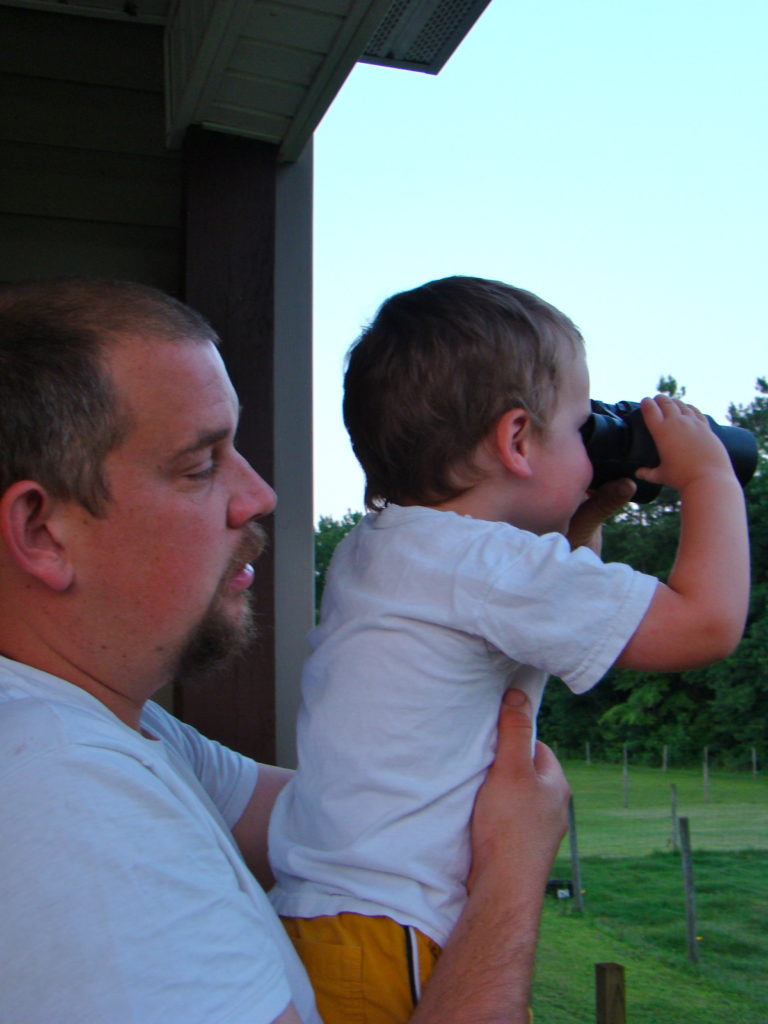 I can’t be sure he actually saw anything through those the way they kept fiddling with the focus.

Then, of course, the Ladybug wanted to take pictures herself. The auto focus on my camera is a little tricky though and all she got were some great pictures of a branch on the rosebushes. (Shhhh, we’re getting her a camera for her birthday next month. Just a little point and shoot for starters.) 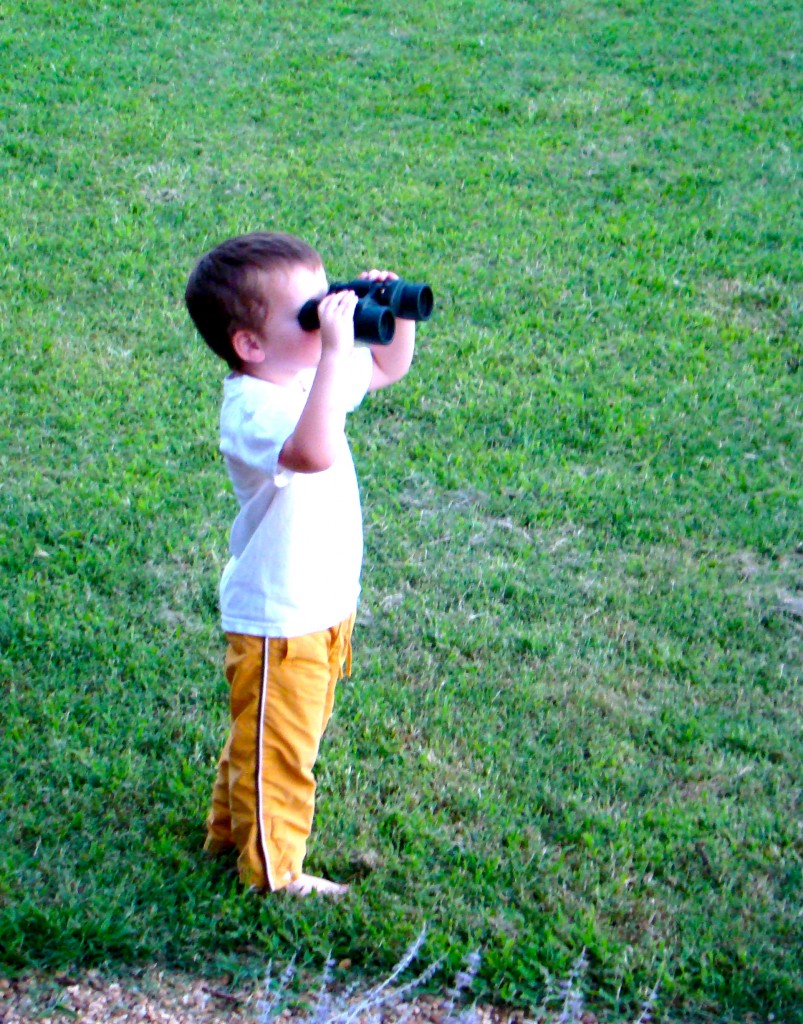 The binoculars became more cool than the deer in a few minutes.

And Speedracer took control of the binoculars and was “seeing sum-thin” for the next 20 minutes. 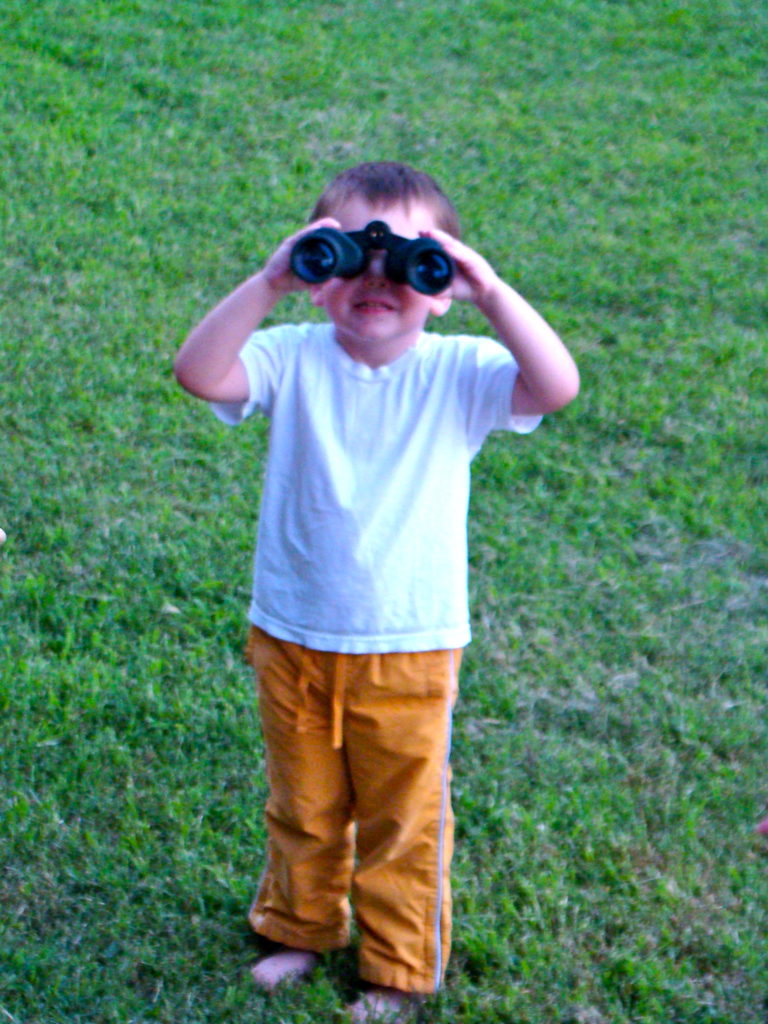 Too stinkin’ cute, no?

Then they headed off to bed and I finished up a tote bag project.

How as your weekend?