Waaaay back over the summer when we painted the boy’s room (oops, completion pictures still pending!) and the playroom, we also went ahead and picked out a new color for the kitchen/dining room and bought paint (we had a great coupon!). And it sat upstairs for a while. Mr. Fix-It decided that we (and I use that “we” loosely, as I always do when it comes to painting anything around here!) were going to tackle that project this past weekend, before we have company this coming weekend.

I didn’t realize that painting would also involve taking down and packing up all the Christmas decorations. I probably should have, but that part didn’t really click with me until I walked into the living room, the tree was gone, and homeless decorations were piled up on the coffee table. So, with our house half un-decorated and the kitchen/dining room in shambles early Saturday morning, he started painting.

I headed out to feed the sheep and cows. A simple daily routine. 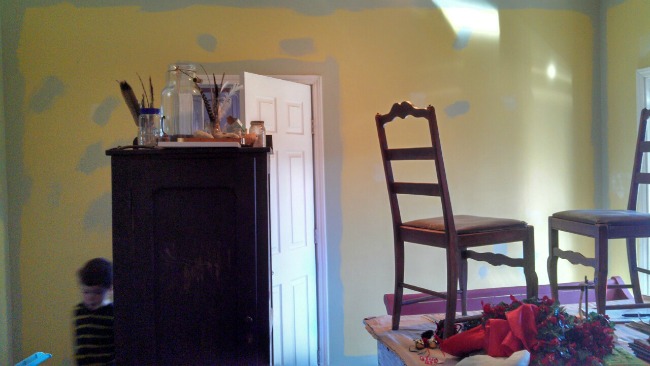 We’re taking the kitchen from a very bright, yellow-y green to a subtler gray-green.

While everyone else is snorting and shoving and madly scrambling at the trough one ewe is laying over by the mineral bucket. She wasn’t laying flat on her side (thankfully!) but she was head down on the ground and completely non-responsive to the standard feeding frenzy 30 feet away. That’s not normal! On closer look, it was Fatty (also known as #23). I don’t call her Fatty for nothing. This was definitely not normal!

I walked over to her and she didn’t even lift up her head. But she was definitely still breathing–and hugely pregnant with anticipated twins.  So I started checking her over.

Membrane color? Healthy pink. Pale pink or whitish membranes in the nose, around the eyes, or gums is a sign of anemia–which is a sign of heavy internal parasite load.

Nose? No swelling or blockage, but covered in mucus discharge.

Body condition? Overall decent for late pregnancy, but could use a little improvement–particularly knowing this was Fatty. Definitely no sign of long-term deterioration, such as parasites or poor nutrition. No sign of significant wool breakage, loss, or overall poor quality.

Quick mental process of elimination left me with a suspected case of pregnancy toxemia–particularly considering that Fatty was usually so…fat. (Here’s a good, quick and dirty post about pregnancy toxemia in sheep and goats, and here’s a slightly more technical post about preventing and treating pregnancy ketosis in gestating ewes ) It was an acute case and we likely missed the preliminary signs at feeding time the night before because it gets dark so early. This was an emergency and she was unlikely to make it through the day.

I ran for Mr. Fix-It and our copy of Raising Sheep (seriously, if you have sheep, you need this book!) to look up the correct dosage of propylene glycol to start some kind of treatment right away. We actually had to heft/roll her on to a pallet and use the tractor to carry her from the big field to the little field behind the garage for treatment and monitoring. It wasn’t that hard because she wasn’t moving. At all.

We called the vet because the best chance she had was getting sugar and calcium quickly, which meant via fluids, and IVs are a little beyond me. Mr. Fix-It wasn’t holding out much hope. 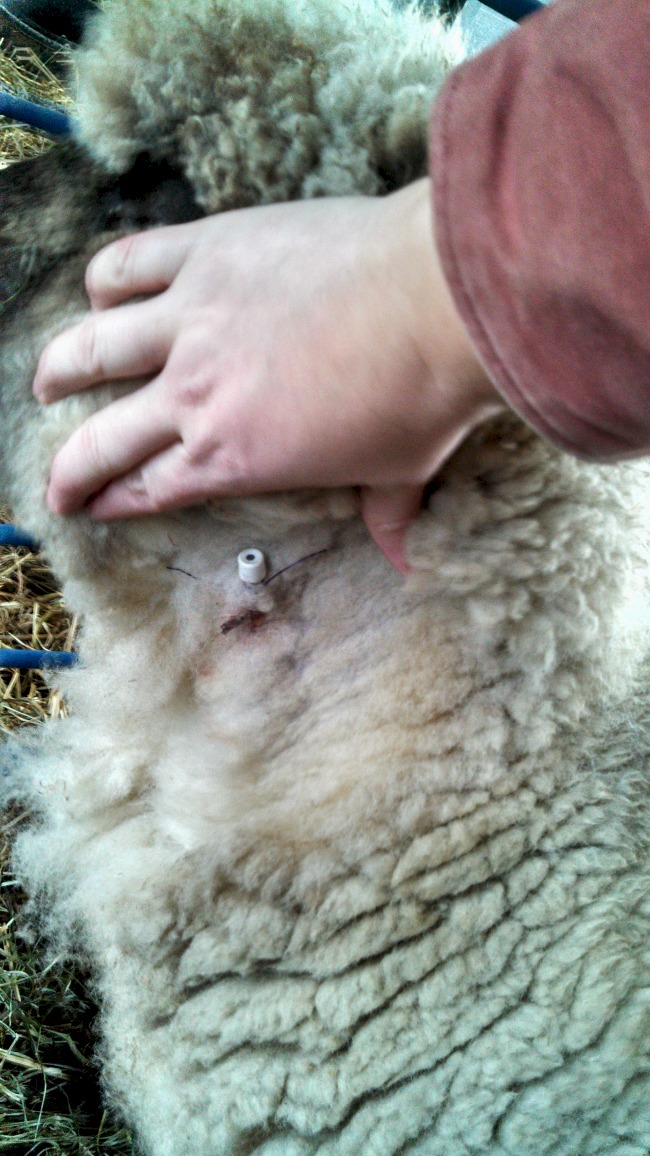 I can do orals. I can do injections. I can do wraps and bandages and even a few stitches…but I can not do this. Yet.

Really, she was knocking on death’s door. Even the vet was a little discouraged when she first examined her. We got a bag of fluids and calcium into her–and she was on her feet by the end of the first bag! She was wobbling around like she was drunk, but 30 minutes before she couldn’t barely lift her head so this was a dramatic improvement! 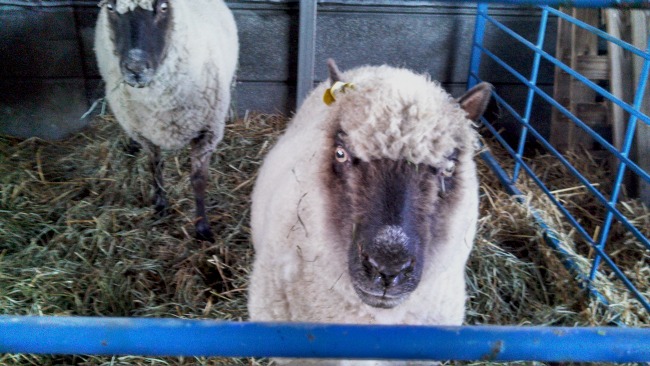 Her wool is so thick this time of hear you wouldn’t even know the catheter is in there unless she turns her head at exactly the right angle.

In the meantime, while waiting on the vet I noticed the second ewe, #13. She had ambled up to the feed trough several minutes after everyone else galloped over and was just wandering listlessly around–not actually eating, with her back all hunched up a her whole demeanor just looking miserable. This was not good! Another prize ewe in trouble!

The Ladybug and I set off to catch her–which was more difficult than her mopeyness would have led me to believe. Eventually Mr. Fix-It came over and helped us round her up. Since she wasn’t completely unresponsive like #23 was, moving her was more of a challenge–and she was all the way at the far side of the field by the time we caught her. We managed to roll her on to the pallet on the forks of the tractor, but then I had to climb up there and squat down on top of her to keep her from thrashing herself off. We wrapped her face in Mr. Fix-It’s tee-shirt to try to minimize her stress. 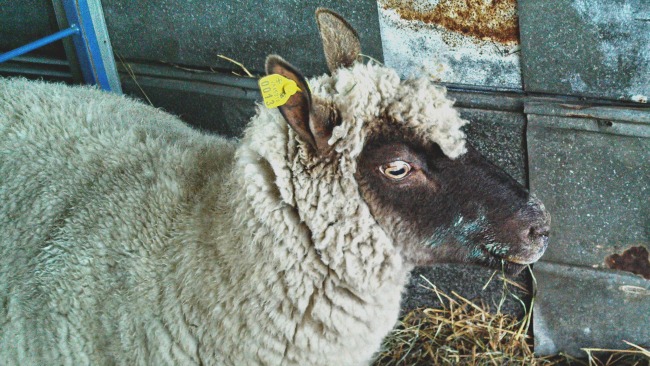 Sick ewe #2…she, and I, and everything around us is now smeared in crusty blue-green calcium paste.

I can only imagine the picture we made, driving down the road…Mr. Fix-It (shirtless!) and the Ladybug on the tractor seat…me riding on a pallet out in front, squatting over a hugely pregnant sheep with her head wrapped in a tee-shirt…it was just about the longest, most ridiculous, two minutes of my life!

Once Fatty was on her feet again, we consulted with the vet for a few minutes about #13. We decided that she wasn’t at nearly the danger point that the first ewe was and we decided to treat her with propylene glycol as well, and add a calcium paste, and keep a close eye on her.

So the vet left, we penned the ladies up, and I started making treatment rounds. We gave Fatty two more rounds of fluids (I can change the IV, I just can’t put the catheter in!), wrestled #13 several times a day to get calcium paste into her, treated them each with propylene glycol and Survive!(vitamin complex) 3-4 times a day, gave them fresh water, hay, and grain, checked on them every couple hours in between all the treatments.

Waited to see someone get up and move away when I came to see them.

Waited to see that someone was drinking from the water bucket. 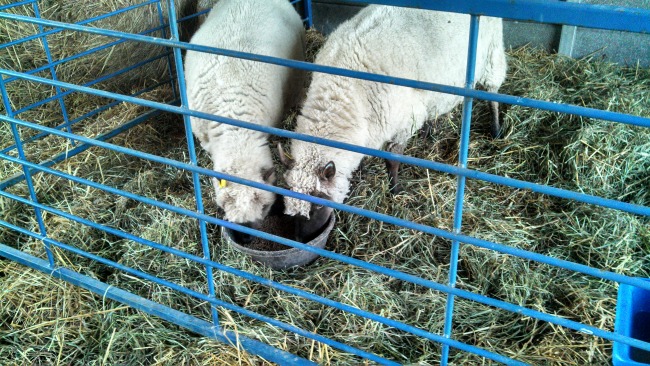 Two ewes pushing at the feed pan–that’s exactly what I wanted to see!

Sunday evening they nearly emptied the water bucket and seemed to be nibbling on fresh hay after their treatments. This morning they were bright-eyes and ornery and finally acting normal!

We’ll continue with the propylene glycol and Survive! twice a day until Wednesday and then they can rejoin the flock if they maintain this improvement. There’s still the chance that they could lose their lambs from the stress–particularly Fatty. But the vet and Mr. Fix-It are cautiously optimistic at this point.

I’m pretty tired from the shepherding, but also from the worry. And from facing the fact that lambing season is right around the corner! Time just marches on and on.

Oh yeah, and we also finished painting the kitchen.